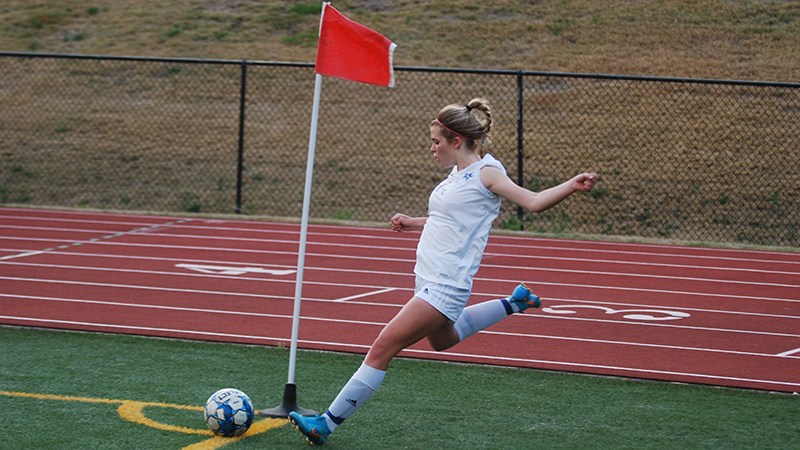 The LaGrange High girls soccer team lost the region championship after falling to Columbus 2-1 on Wednesday.

There were chances on both ends to start the game, but the Grangers dug themselves a 2-0 hole before rallying late to make it a game.

“It was really great we had the composure and grit to keep fighting,” head coach Jon Callahan said.

There was a nasty collision between when the Columbus right winger ran into the Grangers goalkeeper Emma Maradik in the opening 20 minutes of the game. Maradik was subbed out temporarily but was able to return. She made a fantastic one-on-one save in the 21st minute and added another quality save a minute later. She ended up totaling a whopping 10 saves in the match.

Unfortunately, Columbus got on the board with a goal in the 32nd minute of the game.

Karley Perry nearly answered in the 38th minute, but had her shot heading to the upper 90 saved by the Columbus goalkeeper. Ava Arrington put the ball in the net a minute later, but it was waved off for offsides.

The Blue Devils came out of the half on the front foot and scored their second goal in the 48th minute to take a 2-0 lead.

“We didn’t deal with the ball in the air all night,” Callahan said.

Perry once again proved dangerous when she dribbled around the keeper in the 53rd minute but was unlucky to see her shot ricochet off the post.

“She was very aggressive and very hungry and worked very hard to run at their defenders,” Callahan said. “I did not think their defenders could honestly stay with her.”

The Grangers leading goal scorer on the season Sam Cottle went down injured in the 57th minute and did not return to action on the evening.

Tatum Fritchley scored the only Granger goal when she connected on a corner kick from Carlee Roland in the 64th minute.

The Grangers ran out of legs in the final 16 minutes of the game and could not find the equalizer.

This was the final regular-season game for the Grangers. They will now wait to see who they will play at home in the first round of the state playoffs. The Grangers finished the regular season with an overall record of 8-10 and finished second in Region 2-AAAA with a record of 7-1.

Alora Vetsavong scores game winner for the Cavs with…