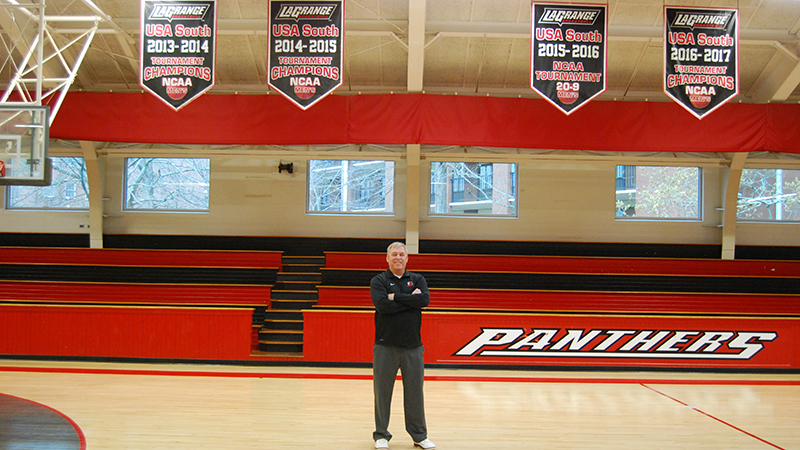 Kendal Wallace has built LaGrange College men’s basketball program into one of the premier teams in the USA South conference. He is now second in the program’s history in wins.

In Wallace’s first season as head coach, the team won the regular season conference championship and during his second season at LaGrange (2012-13) he led the team to its first regular season winning record since the 2006-07 season.

“The team was 5-22 when I got here and only had four players on the team, so we had to rebuild very fast,” Wallace said.

Wallace originated in Tennessee and played basketball at one of LaGrange’s rivals, Maryville. He took some time off from basketball to pursue other ventures but eventually returned to basketball and took an assistant coaching position as his alma mater in 2005. He worked there for six years before being offered the head coaching position at LaGrange.

“There were other possibilities, but I always wanted to live in a town that has a lake and is a small town because I don’t like traffic very much,” Wallace said. “The town itself and the community is very nice.”

Wallace has set his roots down in LaGrange and does not see himself heading somewhere else anytime soon. He is building a special program at LaGrange and hopes to see it continue.

Wallace is 134-110 with the Panthers, with four NCAA Division III tournament appearances, three USA South Tournament championships, and a GSAC regular-season title. This type of success for men’s basketball at LaGrange College is not common.

Wallace will be losing three seniors this season but already knows how he is going to fill that leadership void.

“They were such leaders to these younger guys that the younger guys know how to lead,” Wallace said. “My seniors have done a great job showing them what leadership should look like.”

Leadership starts at the top and trickles its way down. Wallace is obviously top of the leadership totem for the men’s basketball coach and has seen his leadership skills improve over the years.

“Every player that’s been through here will tell you that I’ve calmed down quite a bit,” Wallace said. “I was extremely intense in my first years. I was very intent on doing it one way so I feel like I needed to evolve.”

Wallace has evolved and so has the program. The next evolution for the team is to return to the national tournament and make another deep run.

That next step in the evolutionary process starts with recruiting players that want to elevate the Panthers.

“They have to be a good basketball player and have pretty good grades,” Wallace said. “I want them to be academically driven, and every senior I’ve had here has graduated.”

Five of the last six seasons has seen the team have a team GPA at or above 3.0.

Wallace has been the head coach and lead recruiter solo now for a couple years. He has seen his assistant coaches go on to take other positions and left him a bit shorthanded. Wallace does hope to add an assistant coach before the start of next season.

Wallace has set the standard high for his players on and off the court and the players have followed suit.