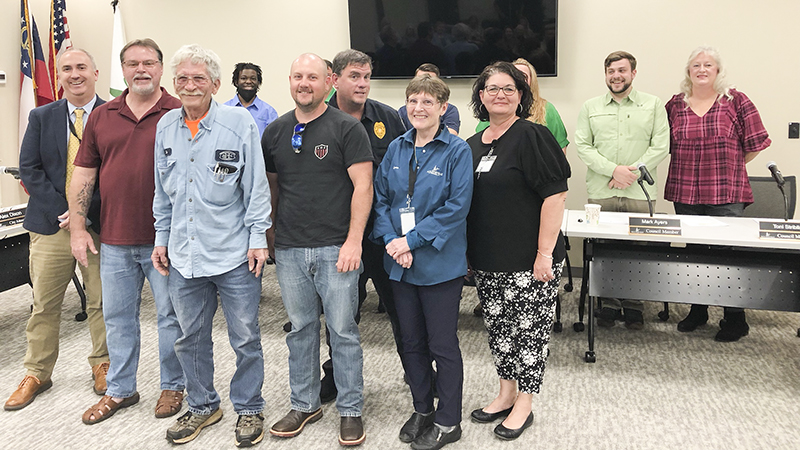 HOGANSVILLE— The city of Hogansville will say goodbye to one of its longest-serving employees at the end of March.

“[Only] eight more days,” John Wagner, who has worked with the city of Hogansville for 42 years, said at the Hogansville City Council meeting Monday where it was announced that he would officially retire March 31.

Wagner jokingly said that he came to Hogansville after driving from California one day. Once he got to Hogansville, he never left.

“It snowed the third day I was here, and I thought I might as [well] stay here,” he said.

Hogansville City Manager Jonathan Lynn described him as a man who knew everything’s place in Hogansville.

“We made the joke earlier that he may not know where any bodies were buried, but he could tell you where the shovel is,” he said. “We’re really going to miss John and we really value what he’s brought to the city of Hogansville.”

Councilmember Tori Strickland recalled a time Wagner helped her through a very stressful project 19 years ago.

“We were cleaning out the amphitheater and it was so overgrown,” she recalled. “I was down there, and I was in tears. It was a mess, we were overworked and we needed light because the electricity wasn’t working. He just sat there with me and hugged me and said it was going to be okay and he put lights up. He fixed all the electricity. Your kindness has never been overlooked.”

His goodbye was not without a few parting gifts. The city awarded Wagner with its first-ever permeant fishing license for Lake Jimmy Jackson, complete with a custom running joke: “This license will never expire for the old man who worked for the city of Hogansville forever.” With the license, he was awarded a new fishing pole.

“I don’t know what the city is like without you,” said Hogansville Assistant City Manager Lisa Kelly.

Former Hogansville Mayor Bill Stankiewicz said he worked with Wagner for 14 years and awarded him with an Ohio State t-shirt.

“It’s folks like you that get things done for us every day of the week,” he said.

“Thank you so much for your service and your time to this city,” he said.

Mayor Jake Ayers noted Wagner’s knowledge of the town and the people in it, an asset that became essential to him as he took on the role as mayor.

“Anyone who is willing to give as much service to an organization [or] to a community, as much as you have deserves to be honored,” Ayers said.