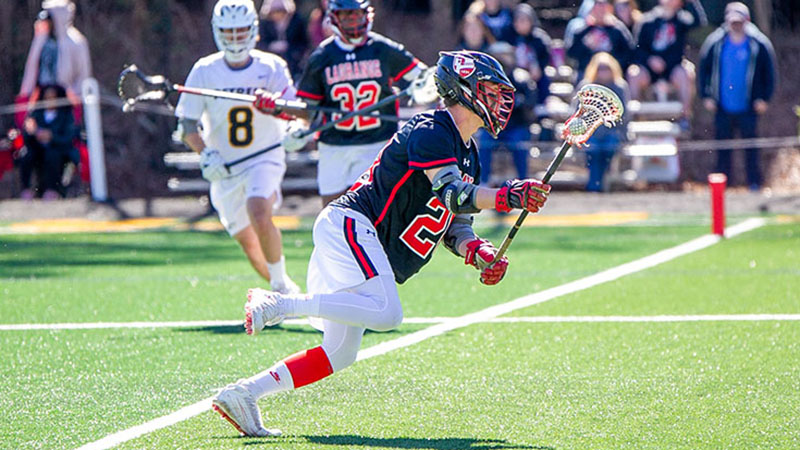 MONTGOMERY, Ala. – LaGrange rallied to beat Huntingdon 14-12 on Wednesday night for its first ever USA South victory. The win upped the Panthers’ season record to 4-5 and evened its conference mark at 1-1.

The Panthers got three goals each from Aidan Story, Ryan Comeau, and Ben Bryan. Story, Ben Bryan, Jack Bryan, Will Howell, and Michael St. John had two assists each. Howell and Jack Bryan had four ground balls each. Isaac Bohrer and Joshua Hargrove combined for 11 saves in goal.

Huntingdon (3-5, 1-1 USA South) led 5-0 after the first quarter. Comeau got LC’s first goal off an assist from Ben Bryan, who followed with his own goal make it 5-2. Story and Ben Bryan had back-to-back goals before the Hawks got a goal in the final minute of the half to take an 8-4 lead.

The Hawks led 11-6 midway through the third quarter. Goals by Comeau, Story, and Howell got the Panthers within three, 12-9, heading to the final quarter.

With Hargrove recording six of his eight saves, the Panthers shut down the Hawks in the fourth quarter. Peyton Gale scored two minutes into the period for LC’s first score. The Panthers tied the game on goals by Ben Bryan and Comeau in a span of just over a minute. LC took advantage of a Hawks’ penalty to get the go-ahead goal. Jack Bryan’s goal with a man advantage put the Panthers up 13-12 with 6:24 remaining. Story got an insurance goal off an assist from St. John three minutes later for the 14-12 final score.

The Panthers host Averett in a USA South game on Saturday at Panther Field beginning at 1 p.m.