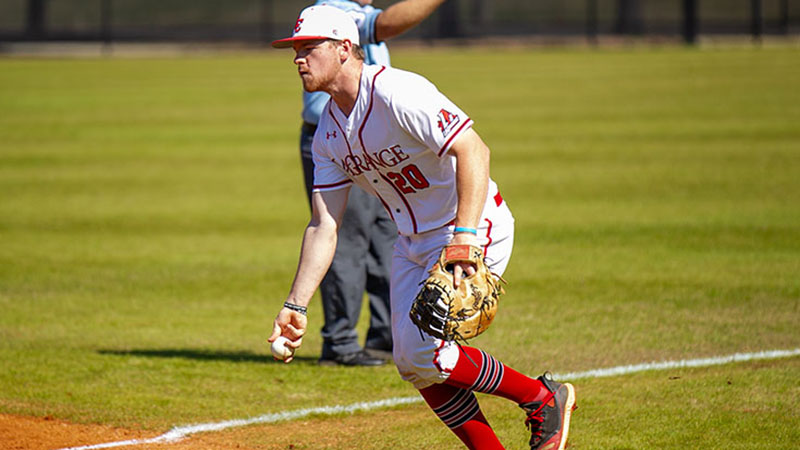 LOOKOUT MOUNTAIN, Ga. – Sixth-ranked LaGrange held on for an 11-9 USA South win over Covenant on Friday. The Panthers’ tenth-straight win upped their overall record to 19-1 and conference mark to 4-0.

LC had 16 hits in the game, 10 for extra bases. The Panthers had season highs of seven doubles and three home runs. Joe Ruth hit his second home run in as many games for his team-leading fourth of the season. Cael Chatham and Matt Eden hit their first home runs of the season.

Jack Layrisson had four hits, including two doubles, scored three runs and drove in one. Chatham had two doubles included in his three hits and had three RBIs. Eden, Christian Dyer, and McKinley Erves had two hits each.

Layrisson’s RBI single, followed by Chatham’s home run to right center gave LC a 3-0 lead in the first inning. The Panthers made it 5-0 in the second. Eden led off with his home run and Erves added a two-out run-scoring single.

Covenant came back in its half of the second with six runs off starter Dalton Brooks. The Scots needed only four hits in the inning, taking advantage of three walks.

Over their next three at-bats, the Panthers retook the lead. Dyer reached on a bunt single in the fourth and came home to tie the game as Ruth ground out. In the fifth, Eden led off with a double and one out later, Gabriel Pallo’s own double brought him home for a 7-6 lead. Ruth led off the sixth with his home run. Layrisson scored later in the inning on a double play to make it 9-6.

The Scots came back with two runs in their half of the sixth and tied the game 9-9 with a run in the seventh. LC took the lead for good in the eighth. Layrisson doubled with one out and took third on a wild pitch. Chatham delivered an RBI double as Layrisson scored the go-ahead run. After Chatham advanced to third on another wild pitch and Jared Aldridge drove him in with a single to make it 11-9.

The Scots loaded the bases with one out in the eighth off Ethan Kramer. Jacob Brown came on for Kramer and got of the jam with a strike out and a fly out to end the inning. Brown worked around a ninth inning walk to record his first save of the season.

The two teams conclude their series with a doubleheader Saturday beginning at 12 p.m.