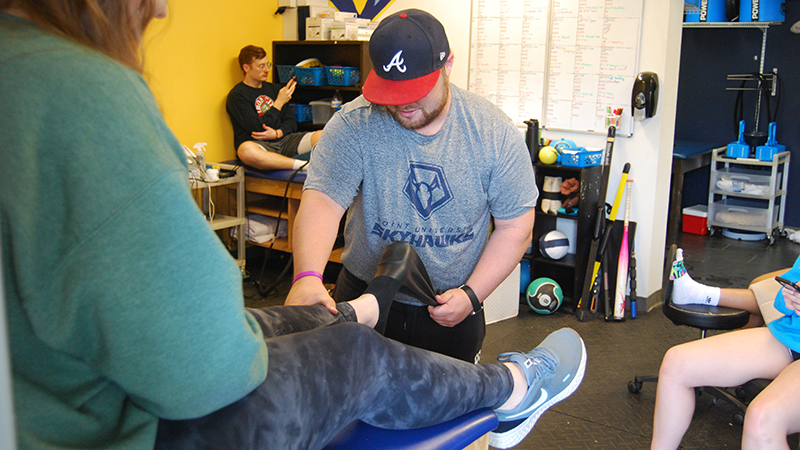 “The whole environment sold me on being just like home,” Welch said. “Hopefully, one day I’ll be starting my own family around here.”

Welch is a born-again Christian and the alignment of Point University with the Christian religion was a huge selling point for him. Welch found God when he did missionary work in Tennessee in 2017. It had such a monumental impact on his life that he got a tattoo with July 2017 inked into his forearm in Roman numerals.

“We serve a faithful God that is there with you on the mountaintops and with you in the valleys,” Welch said. “It’s one of the things that brought me here to Point.”

Over the last several months, Welch’s responsibilities at the university have morphed and changed.

Not only has he taken over more responsibilities centered around administration, he also started teaching a class for the first time in his career this semester. A self-described “not a morning person,” he now teaches an intro to sports medicine class at 8 a.m. every Monday and Wednesday. All 10 of his students are student-athletes or former student-athletes. They are beginning to understand how Welch has been helping them all these years.

“I had one come to me the other day and say ‘now, my injury makes much more sense now,’” Welch said.

Welch is still involved in treating athletes despite the fact that he has taken on more administrative duties.

“There is more than just ankle taping, although I’m not underselling that, I do tape 20-25 ankles a day,” Welch said. “For every one like that, you have athletes in the training room every day for 2-3 weeks rehabbing.”

Welch finds it most satisfying to have an athlete recover from a major injury and return to the field. He helps rebuild their bodies but also mends their psyches as well. Just recently, he helped a softball player rehab all offseason after a major injury last season. It was five to six months of recovery where she did not swing a bat or throw a ball. She rehabbed with Welch multiple days a week for months in order to get back to where she was before the injury. She has been able to play softball this season and has been a major part of the team’s success.

“She shot me a text message saying ‘Oh my gosh Andrew I hit my first [home run] this year,’” Welch said. “She’s been blessed to hit a few more this year, and we hope she will hit some more.”

She, like every patient Welch has had, saw her recovery process have peaks and valleys. In those valleys, it was up to Welch to encourage her and keep her mental state in a place it needed to be to recover properly. The mental aspect of athletic trainers’ jobs often goes unnoticed. While it goes unnoticed, it is just as important to the recovery of athletes as the training he does for their bodies.

Welch knows his position is a relatively thankless role, but he has no qualms over what he does.

“We don’t do this job for the glory. We aren’t the ones on the field getting paid millions of dollars, but I wouldn’t trade what I do for anything,” Welch said. “I hear a thank you from a student-athlete, and that’s all I need.”