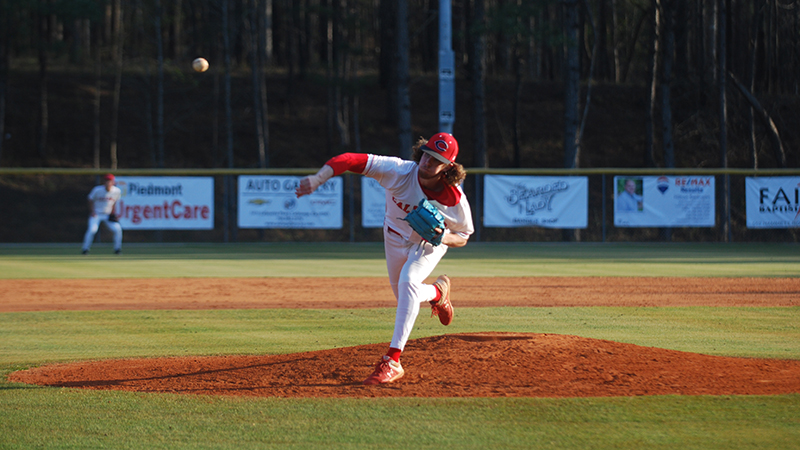 The Callaway baseball team swamped Bremen 6-1 to solidify their first-place standing in Region 5-AA on Monday. This was the Cavaliers’ ninth win in a row as they are heating up going into the home stretch of region play.

The teams were locked in a stalemate until the Cavaliers plated three runs in the bottom of the third to take the lead. Tucker Starling started the scoring on an error. Blake Sheppard hit an RBI single late in the inning to tack on another run before Houston Wilson scored on an error to give the Cavaliers a 3-0 lead.

Callaway scored another two runs in the fifth inning to take a commanding 5-0 lead. Brantin Swanson singled to left field to drive in the first run before Jacob Karvelas stole home to complete the scoring in the inning.

CJ Stephens hit a RBI single in the sixth inning to cap the scoring on the night for the Cavaliers.

The Blue Devils added a consolation run in the top of the seventh.

Swanson was electric from the plate going three for three with one RBI. Karvelas also had a solid day offensively as he went two for three with a run scored.

Justin Moore went two for four from the plate and put on a dominant display on the mound. Moore got the start and pitched six innings. He only allowed one hit and struck out 11 batters in the game. Karvelas came into the game in relief in the final innings where he allowed the Blue Devils only run on the game but quickly shut the door on any chance to rally.

The Cavaliers are now 13-3 on the season and a perfect 6-0 in region play. The Cavaliers lead the region with Bremen sitting second with a record of 3-1. The Cavaliers and Blue Devils are set for a rematch as Callaway travels to Bremen for a doubleheader on Thursday.