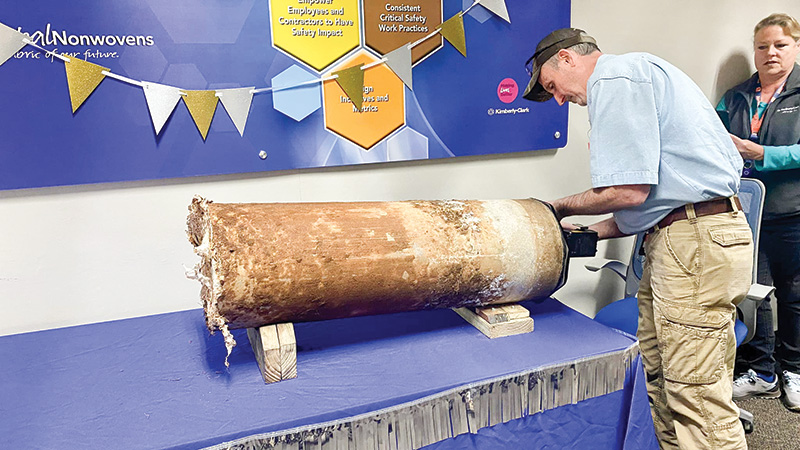 Time seemed to stand still Monday when members of the LaGrange Kimberly-Clark facility unearthed a time capsule from a quarter of a century ago.

Kimberly-Clark, which creates home-care products such as Huggies® diapers, Pull-Ups®, Depend® and U by Kotex®, celebrated its 150th anniversary this year.

To commemorate this celebration, employees at the company’s nonwovens manufacturing facility in LaGrange retrieved a time capsule that was buried 25 years ago as part of Kimberly-Clark’s 125th anniversary.

About 30 current employees worked at the facility when the time capsule was buried.

Those employees along with LaGrange City Councilman Nathan Gaskin, former Callaway Foundation President Speer Burdette, Frank McRae from the Development Authority Board and several other local business leaders participated in a capsule-opening celebration at the facility.

The capsule contained a commemorative flag, old newspaper clippings, employee photos, and some Kimberly-Clark products from the 1990s, according to Kimberly-Clark’s public relations department.

“As employees continue to produce materials for essential products … the LaGrange facility is excited to help deliver Kimberly-Clark’s purpose of Better Care for a Better World for the next 150 years and beyond,” Ron Richardson, the plant manager at Kimberly-Clark’s LaGrange manufacturing facility, said in a prepared statement Tuesday.

Local volunteers pick up close to 1,800 pounds of…