Local volunteers pick up close to 1,800 pounds of litter during 12th annual Sweep the Hooch 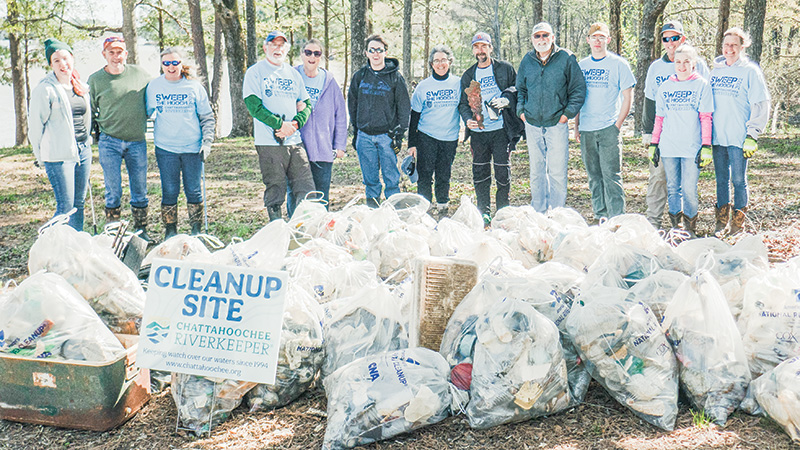 The 12th annual Sweep the Hooch litter pickup event was made possible Saturday thanks to a number of dedicated local volunteers, who managed to clean up dozens of bags of litter from West Point Lake.

The volunteer coordination as part of the weekend’s much larger pickup efforts on 50 sites total throughout metro-Atlanta and the north Georgia area.

The mission of the nearly 1,300 volunteers was to collect as much garbage as possible before it went back into the area’s rivers and lakes.

The local efforts were focused on McGee Bridge Park area on West Point Lake, particularly in a series of driftwood-covered coves where litter of various kinds had accumulated.

“These coves have been gathering trash for years, and over time the limbs break it down into smaller pieces,” he said. “Paper products [break down] in a few weeks or months, but things like Styrofoam never really break down, so they’re sitting there for years. Plastics can take thousands of years.”

Jacobs said it was exceedingly important to get as much trash from the coves prior to the summer when tides will cover the coves completely, inadvertently sending the minuscule bits of plastic and Styrofoam get back into the water. He said these items were the majority of what his organization picked up.

There’s very little West Point Lake park rangers can do to enforce guests clean up after themselves, explained Mike Linville, a park ranger with the US Army Corps of Engineers.

“We have no way of enforcing what people bring [to the lake],” Linville said. “[…] There are not enough rangers to go out there to the parks and police everyone having a picnic.”

An hour into the event, over a dozen volunteers at McGee Bridge Park collected over 30 bags of litter — including things like plastic bags and bottles, aluminum cans and a surprising amount of tennis balls — were gathered. Other items found included clothing, a few basketballs and a fully-intact baby doll. By the event’s end at noon, volunteers locally collected 70 bags of trash and two tires, which came out to approximately 1,800 pounds of trash.

The exact weight of the combined sites haul won’t be known until later this week, Jacobs said.

Last year, the combined sites picked up approximately 75,000 pounds of litter, or about 35 tons, Jacobs said. Of that, more than 2.76 tons were recycled.