Grangers fall to Smiths Station in seventh inning on Wednesday 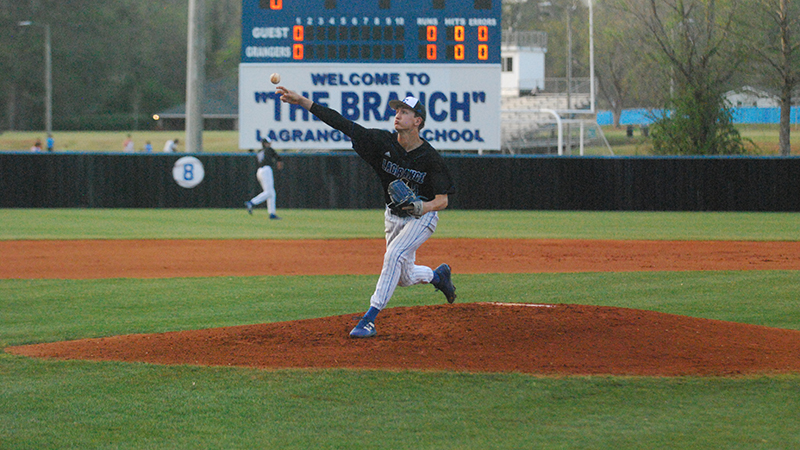 The LaGrange High School baseball team fell to Smiths Station (Alabama) 7-3 on Wednesday. It was a neck and neck game until the Panthers rattled off four runs in the top of the seventh to win the game.

LaGrange took the lead in the bottom of the second when Turner Cook hit a ball over the left field wall.

The Panthers struck back with a two run third inning to take the lead. They then proceeded to add another run in the top of the fifth to extend their lead to 3-1.

The Grangers rallied in the bottom of the fifth to tie the game.  Tanner Langley hit a RBI single to start the scoring for LaGrange in the inning. Robbie Parker scored on error to tie the game at three all.

The Panthers hit back-to-back two out homeruns to plate four in the top of the seventh inning and kill the Grangers’ momentum.

The Grangers could not pull off a seventh inning rally as they went three up and three down.

Trevor Booton got the start on the mound and only allowed four hits and one earned run in four innings of work.

The Grangers only had five hits combined in the game among three players as the offensive lineup struggled all night.

Cook was the star as he went two for three with two runs scored and an RBI. Parker also had two hits in three at bats with a run scored. Langley got the only other hit for the Grangers in his lone at bat.

After winning eight games in a row, the Grangers have now suffered back-to-back losses just this week.

The Grangers fell to 14-6 overall on the season, but their 8-0 region record remains. LaGrange plays a doubleheader versus region foe Jordan on Friday.