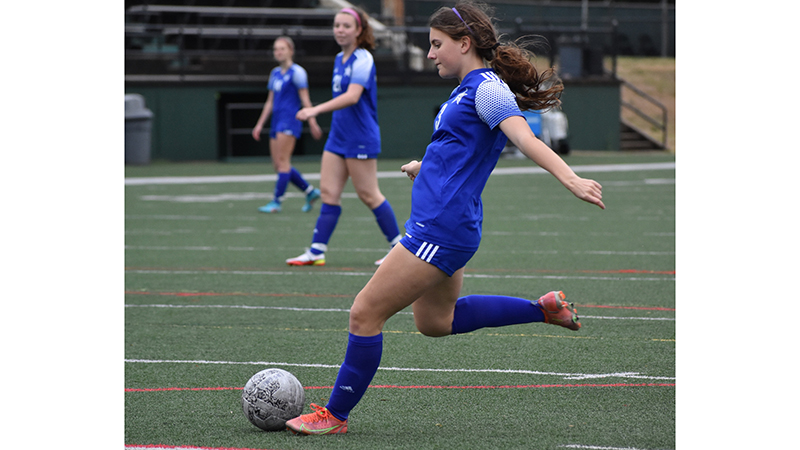 Tatum Fritchley scored a hat trick and garnered two assists against Jordan to be named The LaGrange Daily News’ Athlete of the Week.

Fritchley is a part of the engine room for LaGrange High School’s girls’ soccer team as she controls the midfield for the Grangers. Her soccer journey began all the way back when she was just 4 years old.

“I’ve just grown up to be super competitive, and I’m in the midfield, so I control the game,” she said.

Fritchley is more than just a soccer player as she runs cross country for the Grangers as well.

“My brothers got me into cross country in ninth grade, but I’ve just grown up playing, running, just following in their footsteps,” Fritchley said.

The reason she puts soccer at the pinnacle of her sporting interests? Being a part of a team.

“I really like seeing the difference in cross country and soccer,” Fritchley said. “In soccer, you have the whole team, and you’re all working together. I really like that community aspect.”

Fritchley suits up for the Grangers in the spring and plays travel ball with the AFC Lightning in the summer and fall. Despite the importance of playing travel ball, nothing beats suiting up with her Granger sisters.

“In travel ball, it means you’re more on your own and you’re trying to get scouted, and it’s definitely a higher level of competition,” Fritchley said. “I love the community of LaGrange soccer.”

Fritchley is in her junior season and has taken on more of a leadership role this year. For her, this means passing on the Granger traditions to the younger girls on the team. Being a Granger means a lot to Fritchley.

“We say ‘defend the star,’” she said. “We say ‘being a Granger is being a champion.’ It means coming together and lifting your teammates up.”

For Fritchley, it is not all about winning, even as the team heads to a first-round home playoff game in a couple weeks’ time.

“I’d like to see this team have some breakthroughs, and it’s not just all about winning,” she said. “Just in our past game against Columbus, we didn’t win the game, but I could see our passes are getting better connected, and our defense is not letting as many shots on goal. I just want our team to see what we’ve been working for.”

The assistant coach of the Grangers is Fritchley’s father, Andy Fritchley, who has been with her through her entire soccer journey. He has coached her from the time she was a small child up until now as she is on the verge of young adulthood.

“I kind of like when people don’t know he’s my dad, but when they do, it just gives me something to prove and show that I’ve actually earned my spot, and it was not given,” she said.

The current Granger Head Coach Jon Callahan has helped expand her game, but it is her father that has seen her game grow from kicking a ball aimlessly to dominating the middle of the field for the Grangers.

Her father is more than just a dad and a coach, he is also somebody Fritchley looks up to off the soccer pitch as well.

“He just gives me good advice and we’re pretty similar in our work ethics,” she said. “He’s a great role model and I love having him as my coach.”

During the summer she also helps with her father’s soccer camp as their bond is unbreakable. The summer camp consists of girls under the age of 13 that are interested in the game of soccer. Fritchley and this camp has a symbiotic relationship as it has helped her grow as a player and a leader.

Outside of sports, Fritchley is a member of Service Club. In her limited spare time, Fritchley enjoys going on runs and painting with water colors.

Every game from here on out might be the last for Fritchley in her junior season. The Grangers will be hosting a playoff game in a couple of weeks where she hopes to control the midfield once again and help lead LaGrange deep into the playoffs.