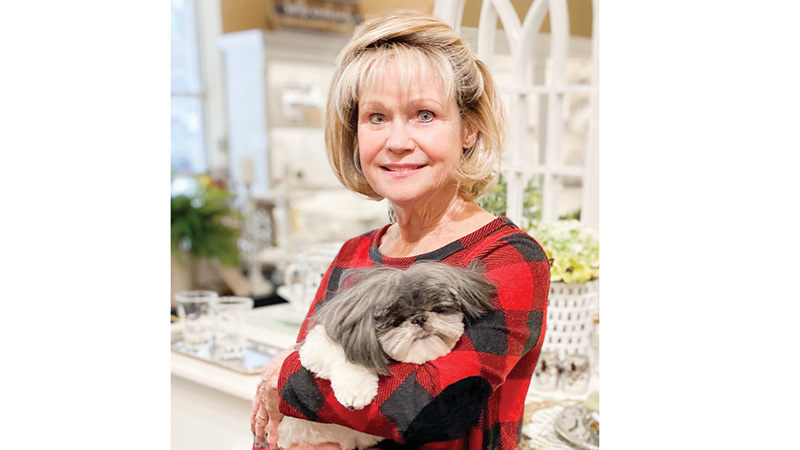 Peggie Scott, the current but soon-to-retire owner of downtown LaGrange gift shop Plum Southern, had not worked a day of retail in her life prior to opening her store nearly 15 years ago.

In fact, Scott had been working a very technical career as a telecom analyst for WestPoint Stevens, a former manufacturing company for bed and bath home products in West Point. The year was 2003, two years following the 9/11 attacks that had left the country still in the midst of an economic recovery. Scott’s co-workers were losing their jobs left and right as the company began a major overhaul and relocated most of its positions overseas.

Concerned for her own future and well-being, Scott began to ponder what she would be able to do if her job was cut next.

During the car ride to work one morning, Scott tapped into the embedded love and knowledge she had for home decorating and began to develop a plan.

“I just thought ‘I’ll just open a store,’” she said. “The whole aspect of owning a store was appealing to me. I love decorating, and it really felt like God had been talking to me all morning. I knew then, 100 percent, that that was what I wanted to do.”

Scott and her husband moved to LaGrange and eventually found a starting location in the heart of the city. Plum Southern’s opened in October 2007 on Lafayette Square in the storefront the Goldens Bike Shop currently sits.

With that, Plum Southern, an upscale gift and bridal registry shop, was officially born.

Scott started simple, bringing in products that matched her own interests and tastes, picking out things that she loved and hoping her customers shared her interests.

“It’s hard to buy things you don’t like … and it’s really hard to find out what’s popular [with everyone else,]” she said.

She began attending markets outside of LaGrange, bringing along her trusted employees, and managed to create a variety for Plum Southern. Currently, she houses an array of items, including exclusive home decore merchandise lines, like Vietri, Juliska, Casa Fina, Costa Nova, Katie Loxton and Beatriz Ball. Other popular lines include Mud Pie, Tag, Joy Susan and Two’s Company.

Porcelain and fine china are some of her bestsellers, she noted, and are the items sought out most for bridal registries, a trend that had adjusted more than gone away.

“One thing that is a real plus about the store is some of the dinnerware brands [are for everyday use,]” Scott said. “Girls are not registering for fine china as much anymore. They want everyday dishes that are beautiful but can go in the dishwasher or in the freezer or microwave. Everything we carry does that.”

The bridal registries kept her afloat during some of the slower years, she said, including the 2008 recession and the slowest months of the pandemic.

“During COVID, I think we had more brides than we’ve ever had,” Scott said. “We were closed a couple of months, but it really didn’t impact us as much. Girls were still having virtual and drive-by showers, and we had curbside pickup. They continued to go on.”

Within a few years, Scott decided it was time to further expand what she was building.

An opportunity arose just prior to 2014 when the owner of the 121 Main St. building, Mason Mansour, offered to sell it to Scott. The building was previously the home of the Mansour’s Department Store, a chain of prominent clothing stores from the early 1900s.

Now that she had the bigger property, Scott was in need of more staff. She brought in her work acquaintance and friend, Debbie Terrell, and the two introduced puppy sisters Pandy and Genie to act as the store’s greeters. The two have stolen the show ever since, Scott said.

“Most days you’ll find Pandy manning the counter, but most of the time she’s sleeping on the job,” Scott laughed.

Her comfortable presence in downtown LaGrange continued for over a decade, but as she surpassed her planned retirement age and her grandchildren grew from infants to young children, Scott decided another change was needed.

In March, Scott officially announced plans to retire and move herself, her husband and Pandy to the Opelika area where her children and grandchildren are located.

Though her retirement plans are necessary, the announcement and the reality that she will have to step away from the store she has spent over 15 years building is bittersweet, Scott said.

“[Plum Southern] is truly, truly my heart and soul,” she said. “I’m very passionate about the store. I want for our customers to have someone who loves it as equally as [I do,] who loves the customers and the people and the friendships and the whole experience of the store.”

A plus, she said, would be someone who has a touch of social media expertise.

Scott said she doesn’t plan on stepping away from Plum Southern entirely, rather she’d like to work at the store in a decorator’s capacity.

Currently, Plum Southern has several prospective buyers, and she hopes it will only be a matter of time before she finds the right successor.

In the meantime, she plans to enjoy her days at Plum Southern, adding little touches to what she built.

“Had it not been for God and lots of tears and friend, I would have never made it,” she said. “I don’t know how I pulled it all together, but I did.”