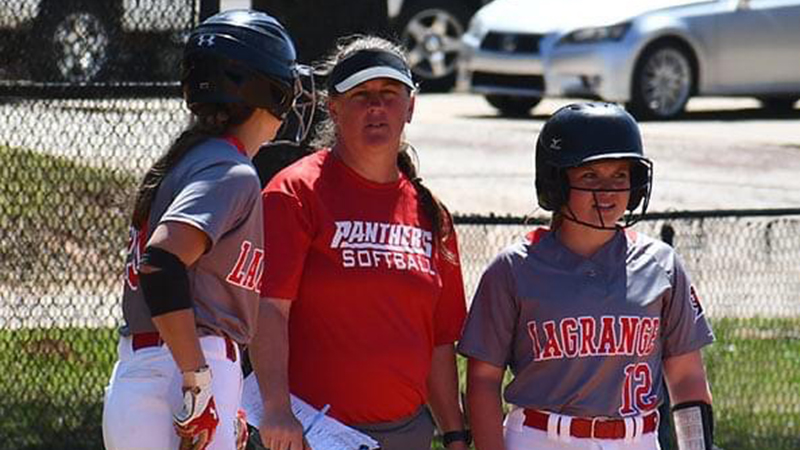 The LaGrange College softball team’s 2022 season has been in full swing now since February, and for head coach Melanie Rushing this is her first season with the Panthers.

Rushing took a four-plus year sabbatical from coaching after leaving Kalamazoo College in Michigan in the summer of 2017.

“I was having a rough internal go of it, thinking ‘dang am I even good at this?’” Rushing said. “We weren’t doing as well compared to what I thought we could and had a bit of an identity crisis.”

Rushing moved to Jacksonville, Florida and decided to found her own company in the meantime, Mental Sweep Spot, where she helped other coaches through “online training and support for softball coaches who want their team to be more resilient, confident and bought in to the team’s mission.”

“I think it said a lot about her and her growth as a professional,” Athletic Director Terlynn Olds said. “It takes a strong person to realize maybe this is not my time and to step back and do some sel- evaluation.”

After a few years off, Rushing wanted to return to the coaching ranks. She applied for a few open positions.

“This job really struck me,” Rushing said. “Living in a city like LaGrange that has a small town feel but is not that small.”

Rushing is not just the softball coach as she has taken an associate athletic director job as well. This is her first time working an administrative role.

“At first, it was intimidating, and felt like maybe it was a stretch for me,” Rushing said. “Rob Dicks is the other associate AD, and I’ve learned a lot from him.”

Rushing has been in her job for about seven months now and her family has finally joined her in LaGrange as it starts to feel more like home. Olds has also helped make LaGrange College feel like home as she saw Rushing’s potential to be a Panther back when she was hired last summer.

“Talking to her, I saw some qualities I see in myself,” Olds said.

The LaGrange College softball team is in a rebuild phase after a down year in 2021.

She knows the team is not going to turn around overnight and has adjusted her mindset when it comes to wins and loses after her coaching sabbatical.

“The biggest thing it gave me was perspective and patience,” Rushing said. “The record we have now would have freaked me out four years back, and some of the losses would have thrown me for a loop, but it has been a lot easier after hearing some other coaches at the highest level say you can take your lumps and build on it.”