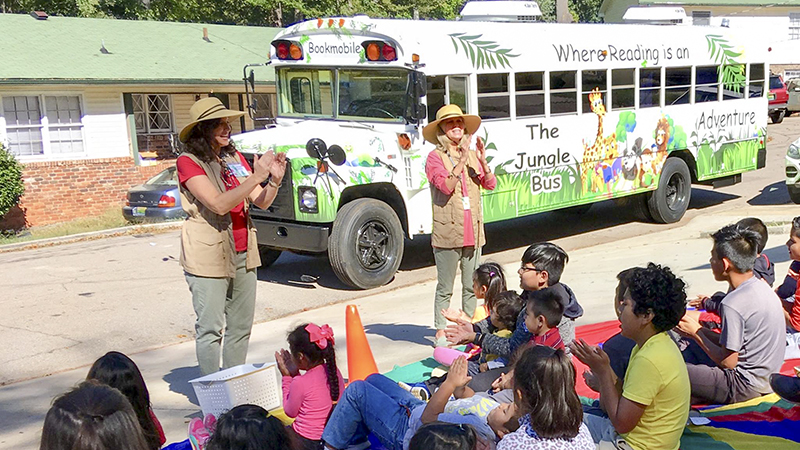 Jungle Jama and Reading Ranger teach a song to The Jungle Bus visitors. The Jungle Bus has distributed more than 3,000 books to local children. (Contributed)

From April 4 to April 22, the THS Beta Club will ask the community to bring gently used or new children’s books to one of three drop box locations at the high school. All the books will go directly to the Jungle Bus, a Troup County School System reading initiative led by reading advocates Gail Gordon and Nicole Kennedy, AKA: ‘Mama Jama’ and ‘Reading Ranger.’

Kennedy said the Jungle Bus relies often on book drives like the THS Beta Club to keep its bus well-stocked throughout the year.

“Gail and I went to THS one day after school a couple of weeks ago and gave a presentation to the BETA Club about The Jungle Bus, why it was started, the challenge of reading on grade level by the end of third grade and the importance of it,” Kennedy said.

Since the Jungle Bus’s conception five years ago, Kennedy and Gordon have had as many as four groups a year reach out to them to start a drive, collecting primarily gently used books. On occasion, the Jungle Bus is able to receive new books from other sources in the community, such as the L4GA grant through TCSS and the  United Way.

Books can be dropped off a Troup County High School rooms B116 or A100 or at the Media Center during the school’s operation hours.