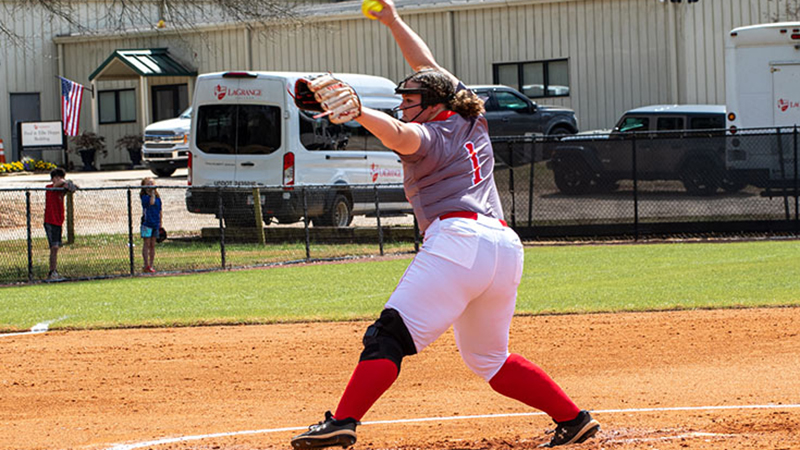 LaGrange split a non-conference doubleheader with Asbury on Sunday at the LC Softball Complex. The Panthers took the first game 8-5 before Asbury rallied to take the second game 9-5.

Abbey Gardner (4-9) got the win in the circle. She allowed three runs in 6-2/3 innings of work walking three and striking out two.

LC (7-20) built a 7-0 lead after four innings. The Panthers scored two in the first and another in the second. In the fourth, the Panthers padded their lead with four runs. Whitaker doubled down the right field line to bring home the first two runs. White’s RBI single plated Whitaker. Abby Vanhoose, running for White, scored as Kenzi Hornsby ground out for the fourth run of the inning.

The Eagles (11-14) did all of their scoring in the sixth inning with five runs off Gardner and reliever Faith Burgamy.

In the bottom of the inning, the Panthers picked up an insurance run with the help of two Eagle errors. Whitaker reached on the first error to lead off the inning. She stole second and moved over to third on a ground out. Hornsby got on board on the second error, allowing Whitaker to score to make it 8-5.

Gardner retired the Eagles in order in the seventh to close out the game.

In Game 2, Gardner staked the Panthers to a 3-0 lead in the first inning. White led off the inning with a double and Hornsby had a one-out single. Gardner followed with her team-leading third home run of the season to left center.

The Panthers added RBI singles by White and Hornsby to go up 5-1. The Eagles rallied to tie the game with three runs in the fifth and another in the sixth.

The Eagles broke the tie in the seventh. Taylor Enlow’s two-run home run off Lindsey Swearngin (1-9) put the Eagles up 7-5. Enlow had three hits in the game, including the home run, and had five RBIs. Asbury pushed across two more runs for the 9-5 final.

The Panthers tied their season high with 13 hits. White and Hornsby had three hits apiece. Gardner had two hits, including the home run.

The Panther face Berea next Saturday at the LC Softball Complex in a USA South doubleheader.