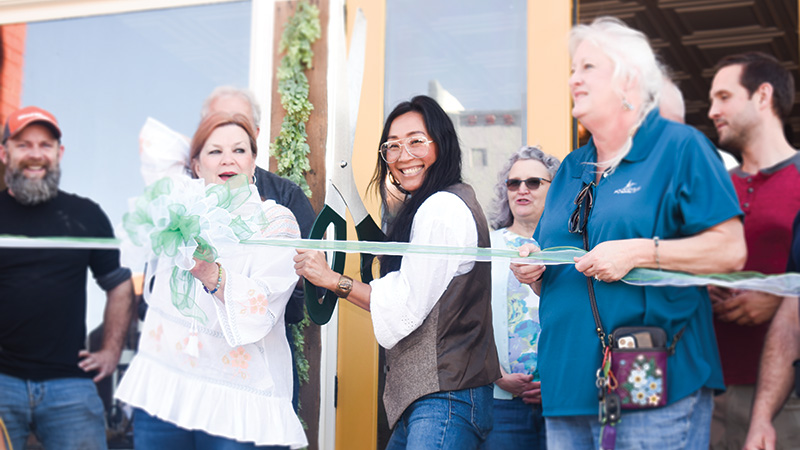 HOGANSVILLE—At only 16-years-old, Agnes Kong knew she wasn’t destined for the highly-structured, rigid academic life often expected of the youth in her home country of South Korea. With her parents’ blessing, she left her South Korea to pursue the broad world of art and photography in America, picking up skills and life experiences that not only shaped the life she wanted to live, but all the design tastes she developed in her new livelihood.

Now, Kong, 49, has settled in Hogansville where she recently opened MUTE, a bohemian-style store of gently used art items, decorative items and refurbished furniture. The new business venture is one of the dozens the LaGrange resident has under her belt, and one of the first ones the self-proclaimed free spirit has pursued that has solid roots.

The title she chose for her store was an intentional choice, she said, wanting to remind visitors to take moments to ‘mute’ out chaotic stress in their lives.

In tune with her relaxed outlook, Kong does not want to be saddled down with the day-to-day grind of operating a business. She plans to be deeply involved with the community and even plans to introduce ideas like an art class to the area’s residents, making her front and back patios a sort of canvas for developing artists.

“I’m not crazy about making a lot of money,” she said. “Of course, I want to be successful, but I want to be part of this community. I just want to interact with a lot of people. I  want to continue to be a happy person and make [MUTE] a happy place.”

She lived in Chicago for over 30 years, briefly returning to South Korea to run a store before returning to the United States, and furthered her English and photography and art skills. During this time, she further honed her nomadic-art style, spending her earlier career studying interior design and architecture on top of her art studies.

“I was a hippie,” she laughed. “My hair was changing all the time, there was always paint on my hands. I’d be in a dark room for hours developing my own photos and shopping at thrift stores.”

At the age of 40, when she had her son, Aaron, she paused her artistic career in lieu of raising him. However, she elected to allow him to choose his own path as she had and helped him hone his artistic interests. Currently, Aaron, 9, helps design tote bags that are sold at MUTE.

“Asian moms are very notorious for pushing their kids to be [successful] in higher education, but I’m not one of them,” she said. “I had a very up and down early life … but I feel like I finally found peace. I want my son to have that type of lifestyle, so I’m not going to expect him to be successful academically. If he does, that’s great, but if he finds [other] happiness, I want that.”

Eight years ago, Kong decided it was time for a change and headed south where she settled in Auburn, Alabama. She said the journey to the south was another culture shock for her, not only in the dryer, warmer weather but in hospitality.

Kong said she experienced heavy racism when she first traveled to Chicago in the 1990s, a time when many Korean students like herself were entering American universities, she said.

“It was a kind of trend,” she recalled.

Kong often faced criticism for her Asian appearance and broken English, events that nearly traumatized the young artist, she recalled. However, she said she faced less of these interactions in the south. Her son had minor experiences among his schoolmates, which Kong chose to use as educational moments.

“I told him, don’t get hurt, you have to go through all of this, mommy went through this,” she said. “Stand up for yourself. Be friendly with them.”

As Kong settled in Alabama, she began to further collect items like frames, paintings and furniture that would eventually become the first loads of inventory of her store. In 2019, she met her current boyfriend and moved to LaGrange with him and has lived in LaGrange since 2021. She joked that she found Hogansville “by accident” only a year ago but was instantly struck with a fascination for the small Georgia town.

“I literally thought, what is this town,” she said.

She particularly fell in love with the small brick building that formerly housed the Baraca plant shop in downtown Hogansville. As luck would have it, the owners of the shop eventually relocated across the street and Kong immediately got to work getting the store ready for its new purpose: housing MUTE.