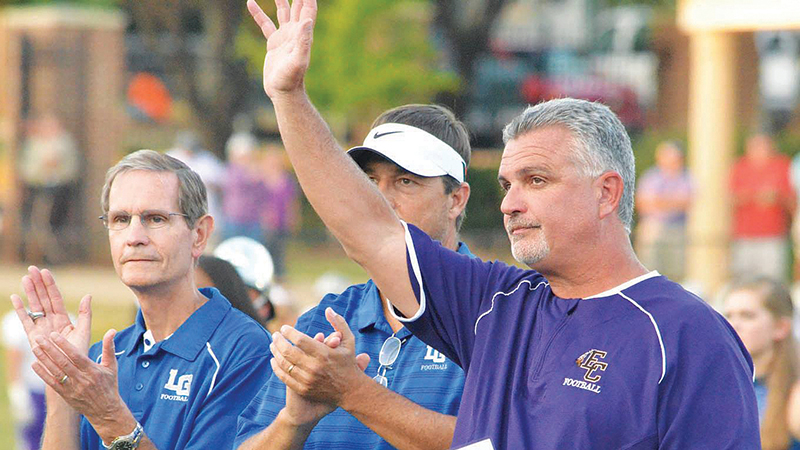 Steve Pardue is prepared for new challenges at Springwood School. His biggest challenge will be the school’s shift from 11-man football to 8-man football. Pardue is meeting this challenge,  not with skepticism or trepidation, but with excitement for a new obstacle to overcome.

“When they called me about the job and mentioned the 8-man team, it really caught my attention because I’ve never seen an 8-man game before,” Pardue said. “I thought at 60 years old learning something new would be kind of fun.”

Pardue reached out to coaches in Alabama and Georgia that have coached 8-man football before, and they responded that “ball is ball” with a few minor changes.

“I reached out to a coach we’ll play this year and asked him about it and he told me basically there are two differences ‘you have five men on the offensive line instead of seven and jersey numbers don’t matter in terms of eligibility,’” Pardue said.

Despite some alterations, Pardue is approaching it like he would an 11-man football team. Pardue is LaGrange sports royalty and is a member of the Georgia Athletic Coaches Association Hall of Fame. Now, he has taken his proven track record to Alabama and 8-man football.

“I don’t know 8-man ball. I don’t know the teams we play, but it had got my juices flowing again,” Pardue said.

Pardue is excited to get to know his new team and the players that make it up. Unfortunately, he has to wait until late May for their first practice together as many of the football players play other sports in the spring.

This transition from 11-man football to 8-man football is not just new for Pardue, it is a new endeavor for the entire school. The Alabama Independent School Association introduced an 8-man football division just this year with the fall 2022 season being the inaugural year.

The number of participants has dropped to the point that Springwood felt the need to drop down to 8-man football. Pardue hopes to bring the numbers back up, but whether Springwood ever rejoins 11-man football in the future remains to be seen.

“We’re going to try and get everybody to come out for football. It’s not for everybody, but with success should bring out more participants,” Pardue said. “I think that more people are looking for an independent private school option nowadays, and we’re trying to get the word out that we have a great product here.”

Pardue is also the new athletic director at Springwood and wants to elevate the entire athletic slate, but he has his eyes on football.

“I’m just encouraging every kid to come out and try football, so hopefully we can get some guys out there that haven’t played before and get a look at them,” Pardue said.

Pardue knows this will likely be his last spot as coach and is not taking a day for granted. Springwood is a school he hopes to help flourish in athletics but with his wife working at the school as well, this will be a journey worth taking regardless of success on the football field.

“It’s a beautiful campus when you pull up and see the stadium, the baseball and softball fields, and I think we’re a diamond in the rough,” Pardue said. “It’s already a really good academic school, and I think we can build the athletics.”