Time keeps on slipping into the future: LHS class of ’61 celebrates 61 year reunion 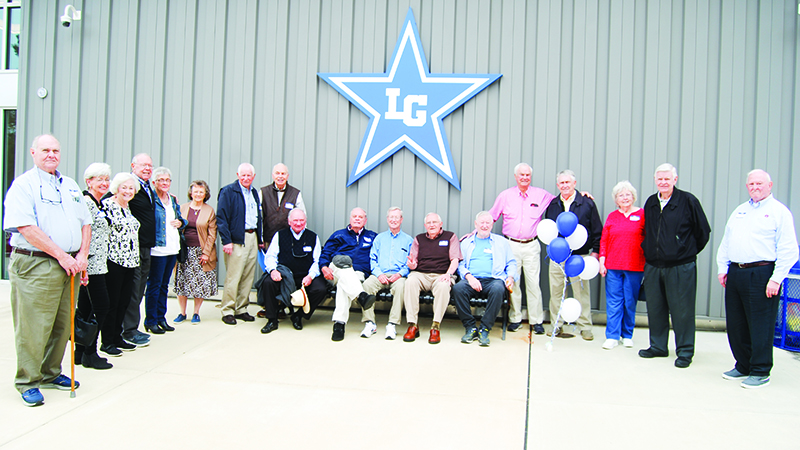 Sixty-one years gone in the blink of an eye. When the LaGrange High School class of 1961 graduated, the Civil Rights Act was still a dream, a culture revolution was in full flow, and the conflict in Vietnam was rumbling to the forefront.

Members of the Grangers class of ‘61 were deployed to Vietnam, dispersed across America, etc., but their bond remained strong throughout their trials and tribulations.

“I got my foundation from the people in this room,” said classmate Jimmy Matthews.

Foundations were laid and moral structures were built during their times walking LaGrange High School’s hallways.

The school commemorated the momentous occasion by memorializing a bench in front of the “new” gym on LaGrange’s campus. A piece of the class of ‘61 will live on forever now and give the former students a reason to come to campus and remember all their classmates.

With the class of ‘61 now in their late 70s, they have seen their hair turn gray, families grow old, and many of their classmates pass on as they remain.

To christen the bench, class president Danny Daniel hushed the jubilant crowd to speak about the ones they have lost over the years. Every time this class gets back together the list grows longer, and Daniel was moved to tears speaking of his classmates that have passed on. Daniel was far from the only one to shed some tears as it was an emotional occasion for all those involved.

“We’re getting toward the end of our runs, so there are getting to be fewer of us as time goes on, so we’re trying to stay together,” Charles Knight said.

But it was far from just a tear-jerking afternoon as there were laughs and smiles aplenty as they shared happy memories and created new memories.

“They had a dance every Thursday night, and we would gather over there and dance and party and have fun,” Larry Culbreth said.

When recalling their time at LaGrange High School, all they had to say were positive things about the school, the teachers and, of course, their classmates.

“I loved my teachers,” Culberth said. “We had really good teachers and a good staff, and you know what, the food was good in the cafeteria too, and we had a great janitorial staff too.”

The overwhelming message of the afternoon was about the bond and kinship that held the class of ‘61 together all these years later.

“We’ve had these reunions almost every five years going back 60 years,” Charles Knight said. “We’ll be there for any of us that might need support with some of us losing spouses or anything like that.”

The legacy of the class of ‘61 permeates through the halls even to this very day. Matthew’s grandson, Austin Skiff, is a wrestler and baseball player for the Grangers. Knight’s grandson, Davis Knight, is the leading scorer on the boys’ soccer team.

It was a fine afternoon for these men and women as they capped their day off at LaGrange High School with a tour of the new athletic facilities by current athletic director and class of 1984 graduate Mike Pauley. The class of ‘61 was shocked to see how much the landscape of LaGrange High School had changed since they were in school many years ago. Despite the change over time, Pauley assured them that the traditions and commitment to the community that the class of ‘61 helped establish resonates with the current crop of Grangers.