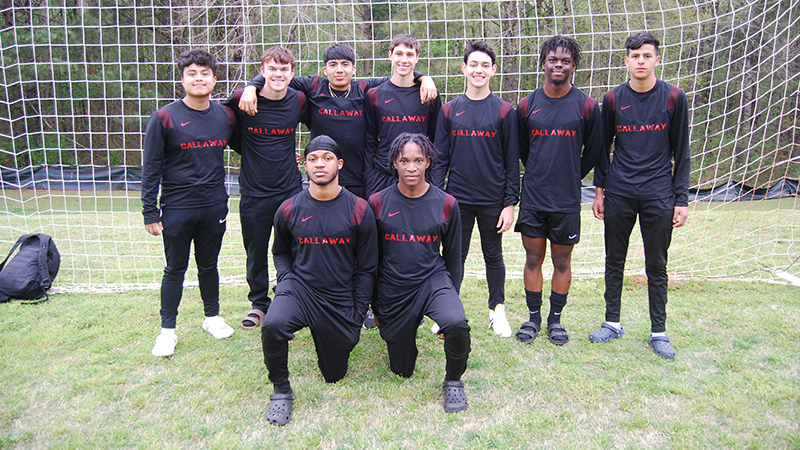 “We’ve been very successful and hopefully they will keep on being successful,” Eubanks said.

“Being a part of this team is everything, it’s more than a team,” Carter. “I love coming out and playing soccer with these boys.”

The boys have various levels of experience as Cavalier Soccer players. Some like Belton have been members for all four years while others like Jennings are first year players.

Jennings was unsure if he would take a liking to soccer at first, but thanked head coach Mike Petite for helping him fall in love with the game.

Recinos is also in his first year at Callaway and has enjoyed every minute of his time on the pitch there.

“Just the overall experience that I’ve had has been amazing,” Recinos said. “All the games I have played are my best memories.”

This year’s team has bonded since day one led by these nine senior leaders.

“When we won our first game this season showed how committed we are to this and how close we are,” Harmon said.

For everybody involved with Cavalier soccer, it felt more like family than just a team.

“To be a part of this team means to be a part of a big family, even though we all have different lives outside of school,” Campusano said. “When we get out here, we’re one big happy family.”

“We’re a part of a brotherhood, and we’re an extended family,” Matais said. “It always feels like we’re a part of something bigger than just a soccer team.”

All the guys look forward to the bell ringing at the end of the school day, so they can go out and play with their extended family.

“It really brings out the joy when school ends, and we can head out to practice,” Belton said.

One of the best memories the guys share together is Raymundo scoring a goal with less than a minute left in the game toi beat Galloway.

“My favorite soccer memory is the 2-1 win against Galloway,” Raymundo said. “It’s a really good memory to have and one of my favorite high school memories. That one was a special one for me.”

The night got even sweeter after the ceremony wrapped as the Cavaliers went on to win 3-0 with goals from Eli Jones, Jennings and Eubanks.

Raymundo player provider as he contributed two assists on the night.

Recinos made one save to keep the Cavaliers sixth clean sheet of the season.

The Cavaliers broke the regular season win record as they went 14-2-1 overall and 4-2 in region play. Callaway begins its playoff push against Model on April 15.