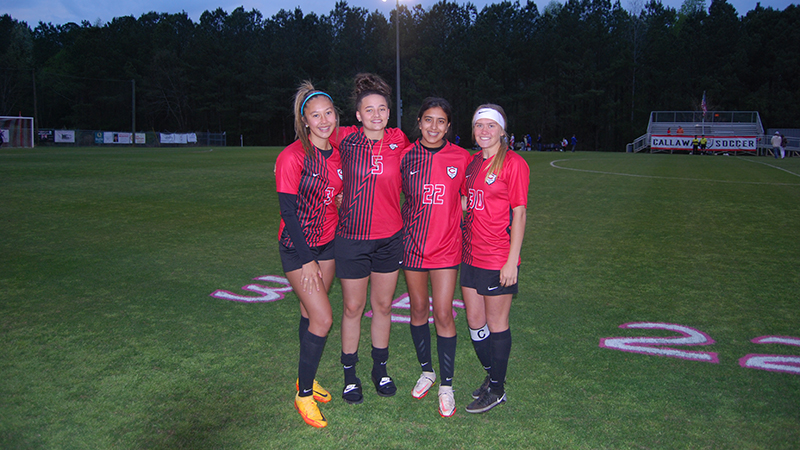 Callaway girls soccer earned a 9-1 victory against Valley (Alabama) on Friday, but the night was made sweeter by the lovely tribute to the four seniors on the team — Alora “Lolo” Vetsavong, Chaple Butler, Mily Ulloa, and Keeley McGuffin. Their paths are about to diverge, but for one night they were put on a pedestal for all the hard work, commitment and dedication they put in to make Callaway soccer great.

“We always work together, and we always have each other’s back,” Ulloa said.

These four seniors laid the foundation and rally the troops as they have set a new standard for girls soccer at Callaway. The team set a new regular season win total and were led by these four girls.

“This team is one big family and everybody supports each other,” McGuffin said. “Everybody just works as a unit together.”

Ulloa and Vetsavong plan to pursue academic endeavors, Butler plans to enlist in the United States Navy and McGuffin will continue her playing career down the road at Point University. They may be heading down separate paths in the near future, but they will forever be bonded by Cavalier soccer.

Vetsavong took a year off from soccer, but was welcomed back to the team with open arms this year.

“I love this whole family,” Vetsavong said. “They made me really love the sport and let me be a part of their family when I came back to soccer this year.”

The consensus on the best memory on the team was clear: when Vetsavong scored a goal with less than 30 seconds on the clock to beat Galloway earlier this season.

“It was insane!” McGuffin said.

Ulloa has another great memory to share as she scored the first goal of her career on the night against Valley in what would be her last regular season game.

All four girls have a deep appreciation for Callaway High School and everything it has given them.

“It makes me want to strive to be a better team player and a better person,” Vetsavong said.

“For me to be a Cavalier brings me a lot of pride,” Butler said. “This school comes with a lot of respect and a lot of honor. Being a Cavalier has become one of the best things in my life when I transferred to this school, and I wouldn’t trade it for anything in the world.”

The seniors were treated like royalty and the team put on a royal performance on the pitch to help them out.

Kate McAteer and McGuffin each scored first half hat tricks with Mary Kate Baswell grabbing two goals as well. Ulloa got the other goal for Callaway.

McGuffin had two assists with Autumn Brown, Butler, and Baswell all grabbing an assist as well.

The Callaway girls soccer team ended the regular season with a record of 16-2 and 4-2 in region play. The Cavaliers kick off their playoff run on April 14 at home against Dade County.