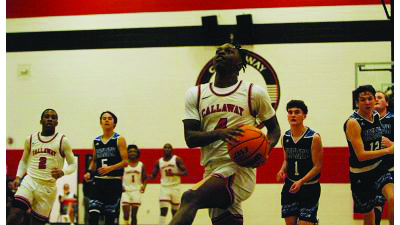 Senior tri-sport athlete Cameron “Cam” Smith is about to embark on a football career at the University of West Georgia.

“They kept in touch with me and kept bringing me out there, and I really like their campus,” Smith said. “I really appreciated their hospitality.”

He was feeling good when he received an offer, but it was also a big moment for his whole family.

“It was one the best days of my life,” Smith said. “My family was so happy for me.”

One of the reasons it was so special for his family was because of the sacrifices his mother had to make to help him achieve his dreams.

“I look up to my mom because she’s a single mom with five kids,” Smith said. “No matter what happens she always finds a way and keeps going. I’ve got to make it so I can help her so she can just relax. That’s my idol in life, my motivation for everything I do.”

He is listed as a defensive back and wide receiver at Callaway High School but sees himself strictly as a safety at the next level.

Despite the fact that he has been playing basketball the longest, football has been his main sport for years now with track and field pretty far in the rearview mirror compared to the other two sports.

“I just love the atmosphere with the bigger crowd at football games,” Smith said. “You also have more brothers on the football team than basketball, so it just makes it more fun.”

His favorite memory at Callaway was, of course, helping his team lift the football state championship in 2020 during his junior season.

Before games, including the state title game, Smith and the team have to have Chief Keef’s Faneto blaring in the locker room.

Another tradition before games is getting a 10-piece hot wing plate, just make sure they are not too spicy.

For the first time this year, Smith took part in a tradition unlike any other in Troup County, he was one of the basketball players that took part in Special Night-Building Community.

“It was fun, I felt good helping them because a lot of people don’t treat them like regular people,” Smith said. “I enjoyed playing with them, and I enjoyed seeing them smile, and they were balling too.”

Despite track being below his favorite two sports, it is the only athletics he has left as his senior year at Callaway winds down. Smith is one of the premium track and field athletes on the boys side for the Cavaliers. He participates in the 200-meter and 400-meter race along with the long jump.

“In tenth grade, my older friends convinced me to try out for track one year and then when I got out there, I liked it so I kept running,” Smith said.

His athletic career will inevitably end in the future, but Smith has plans to stay around athletics after he hangs up the cleats. He plans to pursue a career in physical therapy/training after he moves on from his playing days.

He is already planning for the future after his senior year slipped right through his grasp before he realized it.

“It went by super quick, but it has been good though,” Smith said.