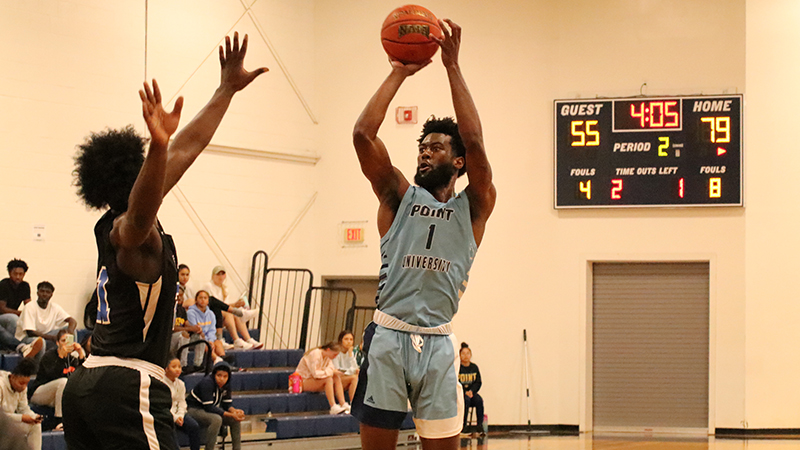 Skyhawk senior Corey Bowen is ready for his chance to play professional ball. He has been integral to the Skyhawks success, but his time at Point University is nearing its end.

Bowen did not start his career at Point. His collegiate basketball career started at Shelton State before he transferred to Point.

“I really needed a start over and to find myself athletically,” Bowen said. “I needed to find a program that would let me be me and give me more of a family type situation.”

Bowen suffered a broken neck with his C6 and C7 vertebrae shattered and tore a ligament in his shoulder in a car accident. At the time, he did not think he would play basketball again.

“I was in my house for three of four months, and I didn’t want to go outside. It was a real low point in my life,” Bowen said. “I thought basketball was going to be done.”

Basketball was not done for Bowen though. He worked his butt off to get back to full health and transferred to Point where he grinded to become one the best basketball players in Skyhawk history. Now, he is gearing up to hire an agent and try his hand at professional basketball. He knows that he will likely begin his professional career overseas, but hopes to play ball in the continental United States at some point. He wants to play in the G-League, which is the feeder league for the NBA, but he is preparing for a career overseas to start. Like every college hooper going pro, his dreams are one day to walk into the biggest and brightest stadiums in the world as a player in the NBA.

One of the main reasons Bowen went to Point was one of his teammates from Shelton State, Lorenzo Freeman, transferred there. They have been roommates for about four years now and are borderline inseparable.

Bowen was named to second team all-AAC this season, but it was not all sunshine and rainbows for the big man as he felt like the team underachieved.

“We could have practiced better, we could have held each other accountable better,” Bowen said. “We kind of felt entitled this season. We took the wrong approach.”

Bowen has grown his game this season. He has improved his shooting from all around the floor and sees himself as a stretch forward at the next level. Despite the season being over, he is still grinding to get better. Right now, he is working on his ability to create shots off the dribble and dribbling in general.

Bowen towers over people as he stands at 6-foot-9 but did not start playing basketball until seventh grade.

“I was actually cut,” Bowen said with a laugh. “The principal actually told the coach that I could play.”

Now, Bowen is uncuttable at the college level and hopes to be the same at the next level. He knows his basketball career will end at some point, which is why he majors in early childhood development. Something he is very passionate about as he is currently interning as a physical education teacher.