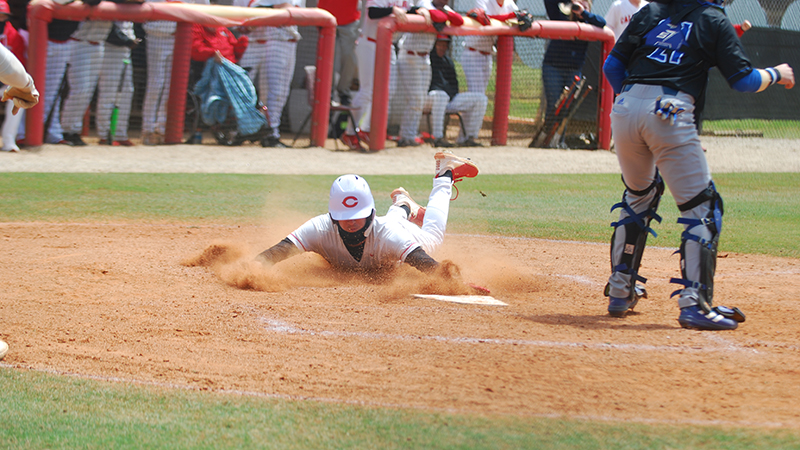 LaGrange High School flexed its might with a 6-3 win over Callaway on Saturday.

The Grangers got the scoring started early with Colton Esposito single to drive home a run in the top of the first inning.

The Cavaliers answered back in the bottom of the first with two runs to take the lead. Blake Sheppard hit a two out double to drive in two runs.

The Granger retook the lead with a three run fourth inning. Cooper Stephens and Robbie Parker scored on an error to take a 3-2 lead. Preston Pressley followed this up with a two out double to drive in another run.

The Grangers further solidified their lead when Tuner Cook hit a two run homer over the left field wall in the top of the fifth.

The Cavaliers got a consolation run in the seventh when Lashun Gates scored on a wild pitch.

Trevor Booton got the start on the mound and put in a good day’s work. He pitched six innings with only four hits and two earned runs allowed with three strikeouts. Trey Cook pitched the final inning for the Grangers in relief of Booton.

Andrew Locke had the only multi-hit day for the Cavaliers as he went two for three with a run scored and a walk. Sheppard was also solid on the afternoon as he went one of three with two RBIs.

Justin Moore started the game at pitcher for the Cavaliers and did not have his usual stuff in his five innings of work as he allowed 8 hits and three earned runs with five strikeouts. Bryce Hubbard came into relieve Moore and pitched the final two innings with two strikeouts and no runs allowed on one hit.

The Grangers are now 17-6 and 10-0 in the region. LaGrange follows this game with a game against Harris County as part of a double header. The Granger resume region play with a doubleheader against Spence on Monday.

The Cavaliers fell to 16-6 overall but have already clinched the region title with a record of 10-2. Callaway’s next game is at home versus Northside on April 15.