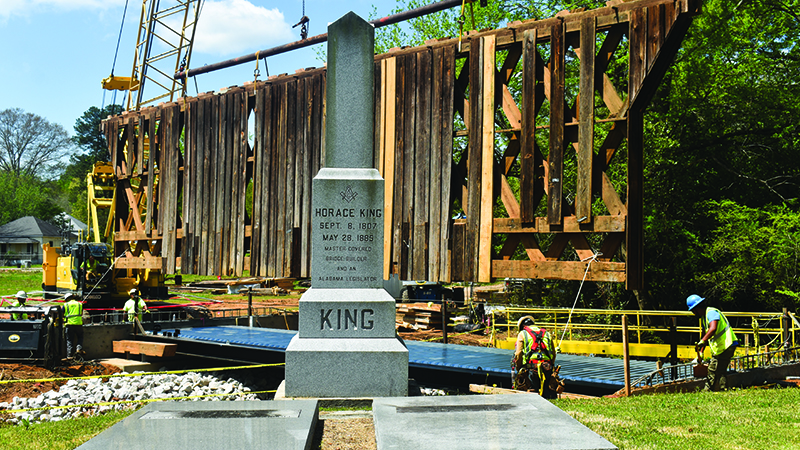 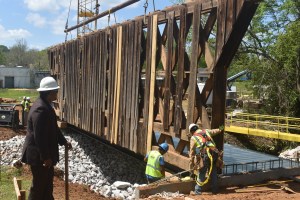 City Councilmember Nathan Gaskin borrows a hard helmet to get a closer look at the King bridge’s reconstruction.

The historic covered bridge built by George King, son of bridge builder and former slave Horace King, is currently being set up near the Mulberry Street cemetery, mere feet from where King and his son, Marshall N. King, are buried.

Following a month and a half of rehabilitation, the Opelika-based construction company, Scott Bridge Company, began reassembling the 17 by 60-foot bridge Tuesday. The crew had the first side and base structure of the nearly 150-year-old bridge up by Tuesday afternoon and planned to erect the second side and roof portion within a few weeks. Scott Bridge Company, who previously worked on a similar covered bridge in Opelika, plans to have the bridge fully complete by mid-May. The city will have a special ceremony to commemorate the bridge upon its completion, Assistant City Manager Bill Bullock said.

The bridge is located over a small creek beside the Mulberry Street Cemetery and is in close proximity to the former Kex Mill property at the intersection of Miller Street and Leeman Street.

Bullock, along with Kathy Tilley, president and CEO of Visit LaGrange, Natalie Hale, executive director of Friends of The Thread and City Councilmember Nathan Gaskin, were on scene Tuesday as the first part of the bridge was being constructed.

“I’m so excited to see it here,” Tilley said. “It’s emotional that it’s here and it’ll be emotional once it’s completely finished.”

Gaskin echoed her comment and noted the King bridge as the “Brooklyn Bridge” of LaGrange.

The bridge and King’s grave markers will be attractions for a new expansion of the Thread, Hale explained. The Thread extension will go from Miller Street to the Kex Mill property andwill include a spur to the Mulberry Street cemetery.

The bridge was originally displayed across a pond in front of the Callaway Gardens production/greenhouses prior to the Sibley Center’s construction. The bridge was relocated to protective storage out of guest view because of the construction of the Sibley Center. In 2020, Callaway Gardens agreed to let the city of LaGrange have the bridge back, and it was brought back to the city in late February.

The bridge is believed to be a replica of one King built that was destroyed in a flood at Harmony Church Road and Wehadkee Creek.

Tilley said that the area where the bridge is being constructed is under constant video surveillance and the area is monitored by police officers.