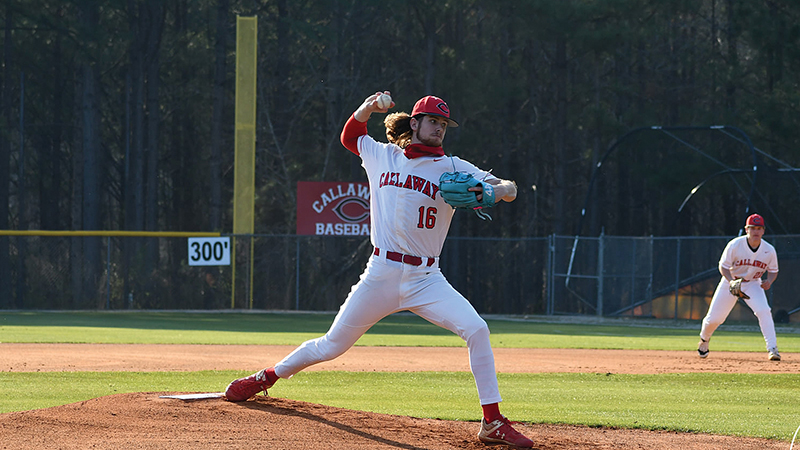 Justin Moore was named The LaGrange Daily News’ Athlete of the Week after another dominant pitching performance. Moore has been an ace for Callaway and feels more comfortable on the pitcher’s mound than at the plate.

Moore has been playing baseball since he was nine. He has played for Callaway for four years now and played travel ball for Excel Baseball Academy out of Oxford, Alabama.

While he does not play any other sports for his school, he does enjoy playing golf on the weekend. He considers The Fields Golf Club to be his home course.

With his time coming to an end at Callaway, he has committed to playing baseball at Lurleen B. Wallace Community College in Alabama.

“It feels just like home, it’s a small town,” Moore said. “It has enough to make it home.”

Despite his time at Callaway coming to an end, Moore still has goals to achieve. He recently helped propel the Cavaliers to their first region title since he arrived at Callaway.

“It felt great doing it my senior year,” Moore said. “Now, we want to go get the ring too. That’s our main goal.”

Moore also wants to eclipse 100 strikeouts this season after hitting 120 last year. He currently sits around 60 strikeouts and knows he will have to continue his strong play through the payoffs to reach that mark.

Moore’s senior year has flown by, and he has to adjust on the fly. One of the adjustments he has made on the baseball diamond has been him seeing himself mature and take on more of a leadership role.

“Being not so vocal, but showing the younger guys how to get after it at practice,” Moore said.

Moore is aware of the fact that Cavaliers baseball head coach Dustin Hubbard has been instrumental in his growth and success on the baseball field.

“He has taught me a lot of things,” Moore said. “He played me my freshman year, and I don’t think I would be where I’m at if he didn’t give me that chance.”

He approaches game days in a very low-key manner, but he does have a go to order off the secret menu at Chick-Fil-A he uses to fuel himself pre-game.

“I got a twitter bowl, it’s not on the menu,” Moore said. “It’s fries with nuggets on top with cheese and bacon.”

The other thing fueling Moore pre-game is his hype list led by NBA Youngboy and Lil Baby. He also has a walk-up song but does not even know the name of it because he let his mother choose it.

“I told her my freshman year she could choose it, but I kept putting it off the whole time,” Moore said.

He let his mom choose his walk-up song because she has been a pivotal part of his life.

“Whatever she does, she doesn’t just do it for herself, she does it for everybody around her,” Moore said. “She’s a very selfless person.”

As his senior year barrels forward to its inevitable conclusion, Moore will always bleed red and black. His time at Callaway has molded him into a player and individual worth being recruited by colleges.

“It means we’re a family,” Moore said. “We win as a team, and we lose as a team. It’s a Cavalier family ,and that’s what I love about it.”