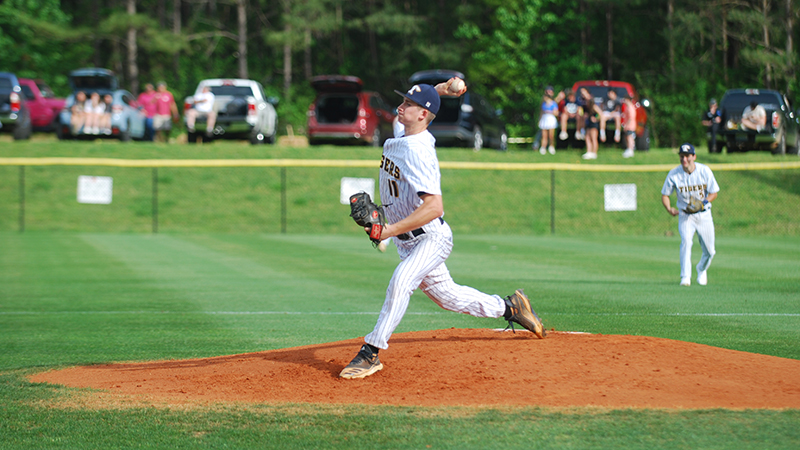 The Troup County baseball team earned a massive 3-0 win over LaGrange on Wednesday to keep its hopes of repeating as region champions alive.

It was a pitcher’s duel with Troup County starter Daniel Martin coming up huge. He pitched a complete-game shutout and allowed only four hits on five strikeouts. Martin got into a bit of trouble in the top of the fifth when the Grangers loaded the bases with two outs. Josh Mcdonald made a fantastic play at first base to catch a hard hit ball and help Martin get out of trouble. Martin also delivered from the plate as he got the Tiger’s game-winning RBI.

Trey Cook was also outstanding on the mound as he pitched all six innings with eight strikeouts. Cook has a no-hitter going through five innings but had a rough sixth inning where he allowed three earned runs.

Martin got the scoring started for the Tigers in the sixth inning when he reached base on an error to drive Andrew Townsend home. With one out, Mcdonald grounded into another fielder’s choice to drive Mason Atkinson home. Reed Morris followed this up with an RBI single to give the Tigers a 3-0 lead that proved insurmountable for the Grangers.

The Tigers only got three hits in the game but made them count. Ty Medders, Will Keeter and Morris got the hits for Troup County.

On the flip side, the Grangers had more hits but could not get one when it counted. Colton Esposito, Turner Cook, Robbie Parker and Gryson Cockrell all got a hit apiece for the Grangers with nobody able to get much rhythm going offensively.

The Tigers close the gap at the top of the region to one game. This was a must-win for the Tigers as they came into the game trailing by two games in the region and a loss would have all but sealed the region title for the Grangers. Now, it is a wide-open race for the region crown.

The Tigers improved to 18-8 overall and 11-2 in the region. The Grangers fell to 20-7 overall and 12-1 in region play. The teams will have a rematch at Granger Park on Friday with the winner controlling their destiny in pursuit of the region title.