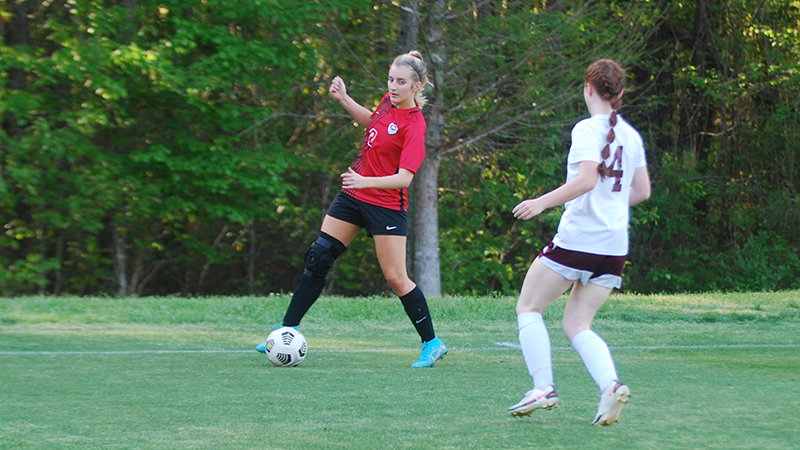 The Callaway girls soccer team suffered a heartbreaking 2-1 loss to Dade County in the first round of the playoffs on Thursday.

“We played really well,” head coach Mike Petite said. “Where we lacked tonight was that last touch, that last pass, that last chance to get that shot off.”

“We were in the game the whole time despite going down early,” Petite said. “We played a really good game from back to front.”

Callaway got one back with a little under three minutes to go when Kate McAteer scored on a Keeley McGuffin assist. This duo was lethal for the Cavaliers this season as both bagged over 30 goals, but this was the last game they will play together at the high school level as the senior McGuffin graduates in a few weeks time.

The Cavaliers were short handed on the night as senior left back Mily Ulloa warmed up with the intent to play in the game but was too ill. This led to shuffling at the back and midfield, which disrupted the normal tempo at which the Cavaliers play.

This season has set a new bar for the Cavaliers girls soccer program as the team broke the regular season win record even though they fell short of their end goals.

“I told the girls ‘right now you can’t see this, but when you step away from it and look at our records, our games, our scoring, our defense, all those things are record setting and you’ll be like wow we did really good,” Petite said, “Right now, they can’t see that because nothing is good right now, everything is terrible.”

The Cavaliers have now been bounced in the first round of the playoffs for two years running. The next step for the program will be to reach the second round of the state playoffs.

“They now know that they can play hard, fast and physical all the time,” Petite said. ”Now the bar is here and that is the minimum that we will accept so when we start to do that consistently then we’ll take it forward.”

Despite losing four extremely talented seniors, the Cavaliers will return 21 players from this team. These 21 players will be hoping to build on the foundation that was established in Petite’s first year as head coach.

The Cavaliers finish the season with a record breaking record of 16-3 and will kick off their following season in February of next year.

Grangers dominate West Laurens 7-0 to move to the…