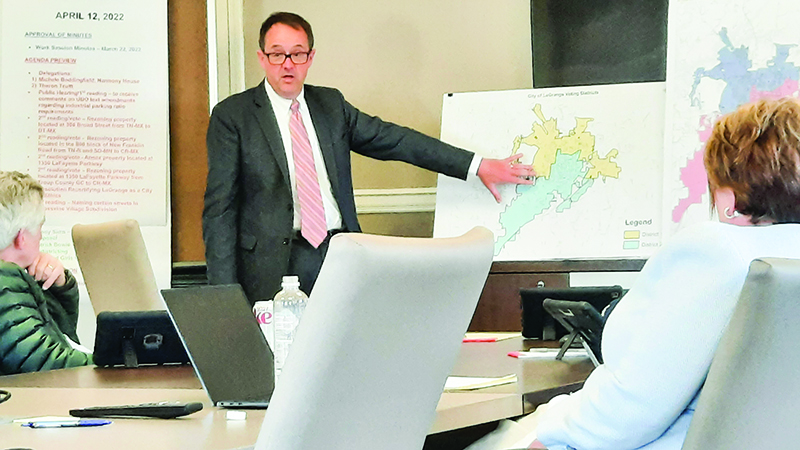 The LaGrange City Council on Tuesday reviewed a proposed map to redraw LaGrange’s city council districts, a plan that would ultimately “even out” the populations for Districts 1 and 2 of LaGrange.

The redistricting map affects how, when and where residents of each district can vote in city elections. Residents affected by the updated map will be notified on their voter registration. The new map, once adopted, will be used for a special election this fall to fill the unexpired term of the late District 1 city councilmember LeGree McCamey as well as for future city council elections.

The United States Constitution requires that each district be redrawn every ten years after the federal census to ensure equal population. LaGrange’s city district maps were last redrawn in 2011 after the 2010 census. Currently, District 1 has a population of 17,414 residents and District 2 has 13,444, creating a nearly 4,000 population difference. This data is based on the 2020 census date, which Thornton and several councilmembers commented was not particularly accurate due to the census moving to online-only during the pandemic.

“[4,000] is too much of a deviation in population to meet the federal one-person, one-vote requirement,” Mayor Jim Thornton said.  “You want to keep the districts compact you want to keep voters continuous, so you don’t have [disjointed areas] and preserve community’s interests and avoiding pairing of incumbents.”

Thornton along with other city officials recently met with the state reapportionment staff as they worked on a new district map. The city council asked the map-makers to take existing district maps, make as few changes as possible to achieve population equality and follow the traditional criteria.

The State of Georgia has a non-partisan legislative reapportionment office that assists the state as well as city and county governments in redrawing maps.

The reapportionment office generates maps that meet the population requirement and follow the approved redistricting standards. These maps can be drawn for cities, county and even school board populations.

The new proposed map would level out the populations of Districts 1 and 2 to 15,502 and 15,356, respectively, Thornton noted. District 2 would be enlarged geographically, specifically in the Hillside area and the hospital area and would take in the mall and River Mill area.

“That’s less than half the percentage of deviation, and the district offices says that’s essentially equal,” Thornton said.

“It does maintain the general geographic orientation of the districts, and in some ways it cleans it up a little bit …”

Under Georgia’s home-rule powers, the city council can adopt a new map by local ordinance, and have planned a public hearing and first to receive comment on the map on April 26, 2022, at 5:30 p.m.  A second reading and vote will likely occur on May 10, 2022.