CHS beats Model, advances to second round of playoffs 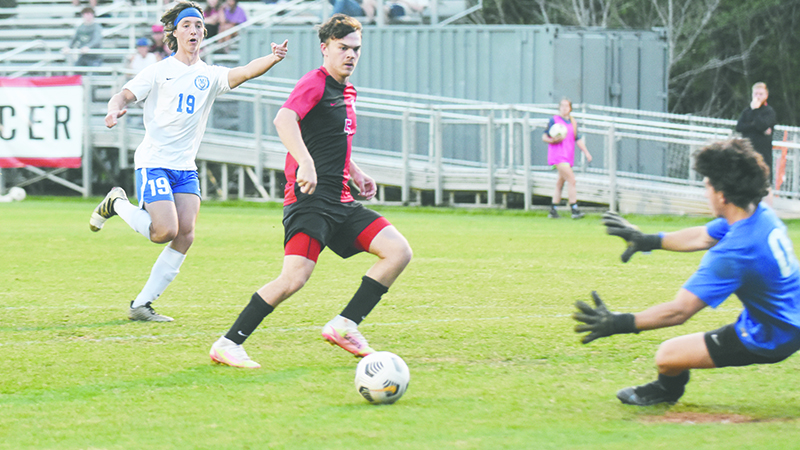 The Callaway boys soccer team earned a hard fought 2-1 victory over Model in the first round of the playoffs on Friday.

“Excitement, pride, happiness, joy for these guys and for the soccer program,” head coach Mike Petite said. “They worked as hard as they had to to get what they wanted tonight, and I can’t ask for more than that.”

The first half was back and forth with the Cavaliers’ Nitle Recinos making a clutch save on a penalty kick in the 25th minute of the game. Recinos was huge all night as he made save after save for the Cavaliers.

“What he’s done is build our confidence,” Petite said. “Everybody in front of him knows he’s got them. He saved a ton of penalties throughout the year.”

The second half was equally as cagey until Greyson Batchelor settled the Cavalier nerves when he scored in the 57th minute on an assist by Jostin Raymundo. Jordan Journee added to the tally when he scored with five minutes left in the game on an assist by Connor Davis. Journee got the winning goal despite coming into the game as questionable with a knee sprain suffered in Callaway’s last game.

Model grabbed a goal to cut the Cavalier lead to one with a little over two minutes left in the game. The team did not fold as they held onto their precious one goal lead until the final whistle.

“The team just dug in and said ‘I will put my body in the way and stick my toe out there and challenge and win the ball in the air,’” Petite said.

Despite the win and quality performance, there are still things that need to be cleaned up going into the second round.

“Offensively, we have to play faster,” Petite said. “That final ball wasn’t being released soon enough. We need to take less touches and play quicker.”

Callaway improved to 15-2-1 on the season. The Cavaliers will travel to take on Lamar in the second round of the playoffs next week.

LHS boys rolls over Perry, into second round of…