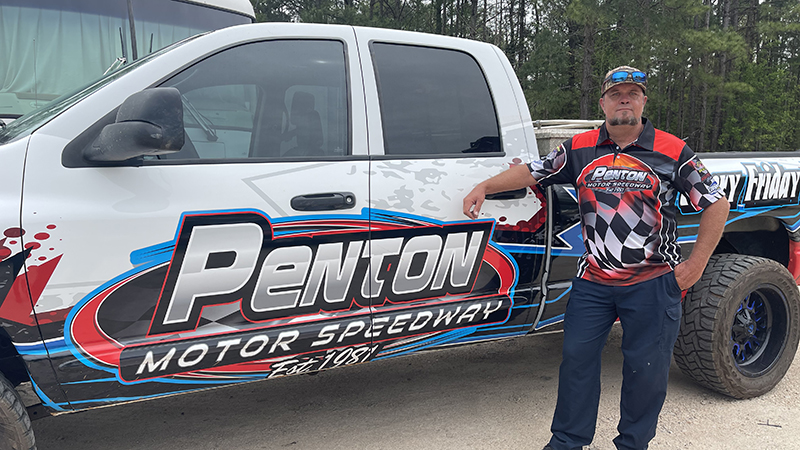 The newly renamed Penton Motor Speedway –previously named Penton Raceway– in LaFayette, Alabama is back holding races every Friday thanks to the efforts of LaGrange native Calvin Pike.

“This track was the first one I ever raced on,” Pike said. “I wanted to create a track that people want to come to. It’s about the racers and not the money.”

Pike started racing when he was just 17 years old with Penton being his “home” track. Being able to own this track and bring new life back into it is a dream come true for him. A racer, Dylan Knowles, pulled up to the first practice race and made it a special occasion for Pike.

“He said ‘I want you to make the first lap in my car, you deserve it,’” Pike said. “It was cool that one of my guys came out there and let me take their car on the first lap at Penton. That right there was pure enjoyment.”

Pike is the founder and owner of Extreme Auto and Truck Repair, which is where he makes a living. Penton is not an entrepreneurship avenue to boost his income. Pike said he truly cares about the sport and the integrity of dirt track racing. This is what he believes will separate his track from others.

“I wanted to make it a little different than the other tracks you go to,” Pike said. “They were about the dollar, but my track is about the racers and the fans. If I can break even and give people a great place to come race and bring families out to enjoy racing on a Friday night, that’s all that matters to me.”

When Pike made the announcement that he was going to take over the track, excitement began to build in both Troup County and Chambers County. However, that excitement only added to the pressure to make the races special for the fans that attended.

Pike put in his blood, sweat, and tears over the last nine weeks to get the race track back to fully operational. He operated mostly by himself in what was a herculean effort to revive Penton, which had lay dormant for nearly five years.

“I was out there learning how to use a motor grader,” Pike said. “I’ve never sat on one in my life.”

After all the work put in to make the first race back at Penton on April 8 special, Pike was unsure about the response he would receive.

“The whole last week I didn’t sleep because I was worried and stressed,” Pike said. “Friday night I was able to smile and seeing the cars on the track was payment for all my hard work.”

The response from the fans made Pike even more enthusiastic. Over 400 spectators filled up the stands, which was the most the track had ever hosted.

“To have people come up to me and say ‘this place is amazing, we’ve never seen this track like this with the facilities so nice and everything was clean and updated,’” Pike said.

Racers participating in the various racers were not limited to Georgia and Alabama, they came from all over the southeast including South Carolina. Many of them traveled over five or six hours to get to the track.

As word spreads about the reopening of Penton Motor Speedway, Pike hopes to draw in even bigger crowds and racers from even further away. Penton will have races every Friday night in LaFayette.