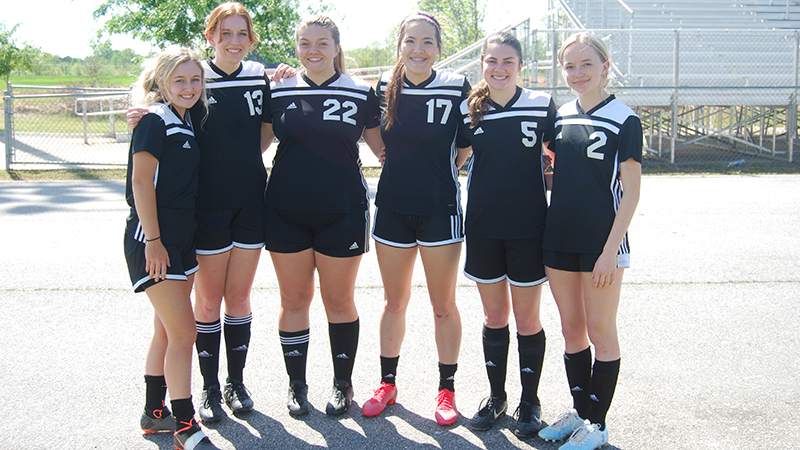 Lafayette Christian School is getting ready to say goodbye to six senior girls soccer players — Lydia Bryan, Abbie Elder, Juleigh Haynes, Grace Kelly, Katie Kilmer and Hana Stevens. These six players have been integral to establishing a culture at LaFayette that is about more than just winning.

“Being a Cougar means not acting like everybody else when we play soccer,” Elder said. “I think the other teams, if they are being jerkish or not saying the right things, can notice how we play and our sportsmanship.”

“It’s about showing grace in everything we do, win or lose,” Kilmer said. “We win together and we lose together.”

Good sportsmanship is key to the team as the seniors try to implement this on the younger girls.

“It takes a lot of courage to have good sportsmanship in a game this physical,” Kelly said.

The team has a great bond, especially the six seniors. Some have played together all four years, others transferred in or started playing later into their high school careers, but now they have a bond built on a soccer sisterhood.

“I value everybody’s teamwork and everybody being nice to each other,” Bryan said. “I’ve just never had a team that had this much unity before.”

The team is united by something more than just soccer though. They are also united by their love and faith in their Christian values.

“We carry the name of Jesus with us and try to display his love through everything we do on and off the field,” Stevens said. “It’s a big thing to carry and remember when we play different teams that might not display the same sportsmanship. We have to remember what we’re doing it for.”

As seniors, they have taken on more of a leadership role this year for the younger girls on the team.

“I truly love working with them, not just physically, but talking through things and helping them out with personal stuff as well,” Kelly said.

Haynes interjected that Kelly has been a leader for the team this year. Being a part of this team is an important part of all six of these girls’ lives, but it is even bigger for them to be a part of the school that has such a close-knit community vibe.

“It means building a fellowship with people that are like minded as me who all want the same goal in our spiritual walk in life,” Haynes said.

The girls are nearing the end of the journey at LaFayette, but they will carry the bond built on the soccer field with them forever even as they disperse across the state and the country in the next steps of their journeys.  Their leadership and skills will be missed by the team going forward.

“They are big on leadership and keeping everybody in check and focused throughout the season,” head coach Chris Bryant said. “We’re going to miss them next year.”