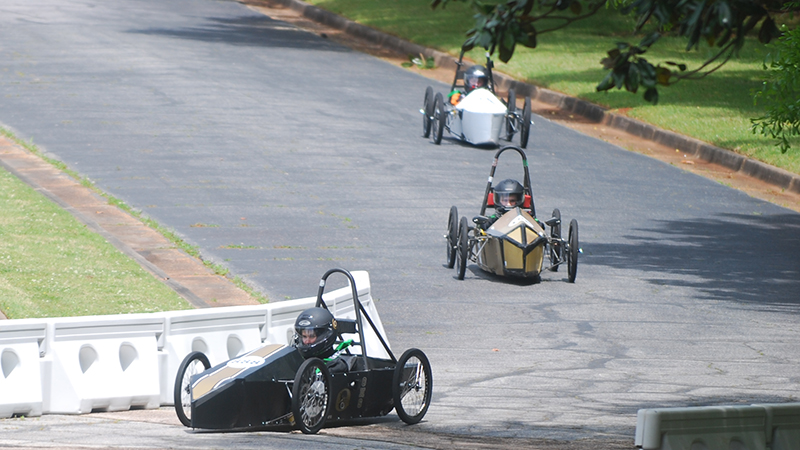 “I thought it went really well except for the rain,” event coordinator Matthew Graham said.

After not having last year’s LaGrange grand prix at LaGrange College due to a scheduling issue, the race was back at the college in full force this year.

Graham is the head of the Long Cane Cougar racing, which compete in the middle school level and his team’s had great showings as they typically do. The 999 team (modified division) won first place in the endurance race, first place in presentation and first overall. The 999 (eighth grade) team beat their previous track record of 44 laps set in 2019 (same number of laps but did it 2 minutes faster) and on team presentation they outscored all middle school teams and all but 1 high school team. In the endurance race, they got more laps than all the other middle school teams and all the high school teams.

Long Cane was not the only local team that had a good showing. In fact, Graham was pleased to see the other local teams build their programs up by having success at the grand prix.

“I’m more excited about how they did than how our teams did,” Graham said. “We have the routine down, that’s kind of just a given. I was really pulling for the high school teams.”

The other local teams were the Gardner Newman No. 92 car that competed in the middle school stock division and finished sixth place overall and the THINC Academy No. 706 that finished fifth overall in the stock division.

This grand prix brought teams from far and wide to enjoy what the city of LaGrange had to offer. Two teams from the Torquay Academy from Torquay, England made the trek over 4,000 miles to participate in the grand prix.

“The Development Authority of LaGrange donated two large gift baskets to the two teams from Torquay Academy in Torquay, England to help them remember their visit to LaGrange,” Graham said. “Visit LaGrange also put together some goodie bags for them, and we appreciate them helping us show great hospitality to our international teams.”

This was the first time a European based team has traveled to America for a Greenpower event in nearly two years. With COVID-19 restrictions lessening, the teams have the ability to travel further for races.