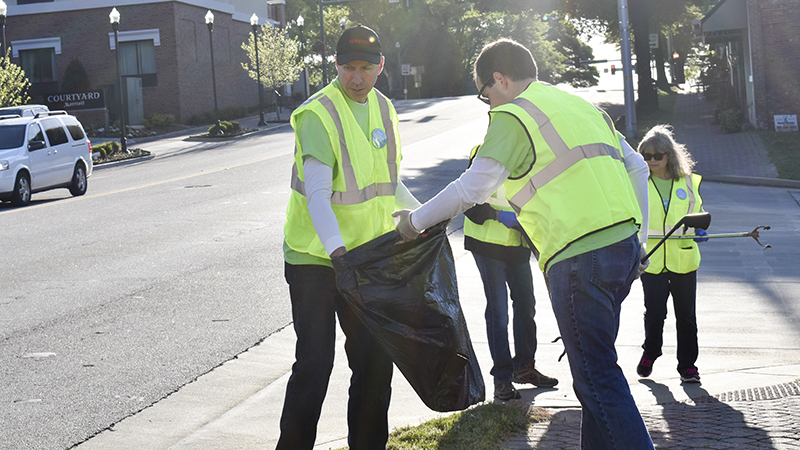 Patrick Bowie, the utilities director for the City of LaGrange holds out a trash bag so that LaGrange Mayor Jim Thornton can dispose of litter on Friday on Vernon Street. (Alicia B. Hill | Daily News)

The City of LaGrange will shut down business Friday, April 22 from 8 a.m. to 1 p.m. to pick up litter throughout the main thoroughfares.

Hundreds of city employees, elected leaders and community partners plan to participate in the city’s annual Leaving LaGrange Better Than We Found It event.

This year the city is asking the community to report dump sites for employees to clean up on Friday, April 22.

The city will also be utilizing its new litter picker machine that picks up litter ten times faster than city staff alone.

City Manager Meg Kelsey began the litter clean-up campaign in April 2018 hoping to send a message to the community that the City of LaGrange is serious about cleaning up the community leading by example.

The April 2018 event was so well-received with employees, citizens and elected leaders, the city began hosting monthly cleanups throughout the city. Since 2018, the city is proud to have partnered with many different community groups, businesses, schools, colleges and individuals in leaving LaGrange better than we found it.

“It’s been extremely rewarding to see our employees and our community come together for this annual event,” Kelsey said.

“Since 2018, we’ve taken pride in leaving LaGrange better than we found it and leading by example. We invite everyone to join us.”

The slogan was inspired by the comments by City Councilmember Nathan Gaskin.

“My mom also told me to leave things better than I found it,” Gaskin said during a previous city council meeting.

After the cleanup on Friday, city employees and volunteers are invited back to Sweetland Amphitheatre to have lunch before going back to work to open city offices back up at 1 p.m.

The city’s next scheduled litter cleanups include:

Anyone who would like to participate in Friday’s city-wide clean-up should meet at City Hall, 200 Ridley Avenue, at 8 a.m.