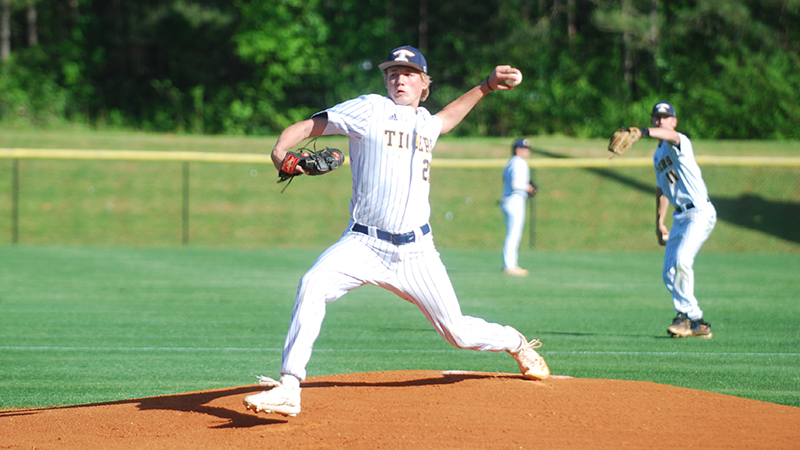 The Troup County baseball waltzed its way to a comfortable 12-1 win over Jordan on senior night. Before the first pitch, the Tigers celebrated five senior players — Rocky Pemberton, Brett Haynes, Daniel Martin, Mason Atkinson, and Andrew Townsend. Each of these five players added to the recipe of success for the Tigers as they are playoff bound once again.

Jordan took a quick 1-0 lead in the top of the first inning before the Tigers opened the floodgates in the bottom of the first.

Josh Mcdonald got the scoring started for the Tigers when hit an RBI single. Devon Murphy scored on a passed ball before Haynes singled to drive in another run and give the Tigers a 3-0 lead. Reed Morris scored after Atkinson got hit by a pitch with the bases loaded. Haynes and Will Keeter scored on a wild pitch and a passed ball respectively to end the scoring in the inning.

Mcdonald drove in two runs on a single in the second inning to stretch the Tigers lead out even more. Keeter scored on a wild pitch in the bottom of the third to give Troup County a 9-1 lead.

Jordan could not rally in the top of the fifth inning and the game ended due to the run rule.

The senior Pemberton got the start on the mound but was pulled quickly after not having his normal stuff. Hardnett came in to relieve him and pitched two innings allowing no hits on five strikeouts. Atkinson pitched the final three innings and allowed two hits on one strikeout.

Despite it being senior night, it was the junior Mcdonald who had the best night offensively as he went 2-for-3 with three RBIs. Mcdonald had the only multi-hit and multi RBI game for the Tigers. However, Martin went 1-for-1 with two walks and three runs scored. Haynes, Atkinson, Murphy and Keeter all had an RBI apiece.

Troup County improved to 19-9 overall and 12-3 in the region. The Tigers are locked into the No. 2 seed from Region 2-AAAA in the state playoffs. Troup County plays Woodward Academy on March 20 with just one more game in the regular season after that.