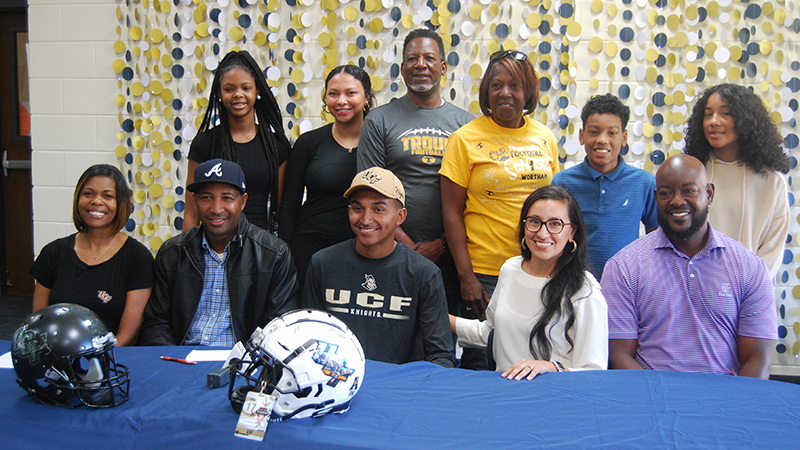 Dwartney “Buddy” Wortham signed his letter of intent to play wide receiver at the University of Central Florida in Orlando.

“I’m just blessed for this opportunity, and I want to thank all the UCF coaching staff,” Wortham said.

Wortham will be heading down there to get ready for his freshman season on May 31. He will be attending UCF as a preferred walk-on.

“Division I programs are given 15 to 20 preferred walk-on slots,” Troup head football coach Tanner Glisson said. “He’s getting one of those prized opportunities to be a walk-on.”

As a preferred walk-on, Wortham can earn a full-ride scholarship if the school decides to elevate him from walk-on to scholarship player. Wortham has a 4.3 GPA and has academic scholarships to help mitigate the cost of college. Wortham could have taken a full ride scholarship to play football at the likes of Berry, Shorter, or LaGrange College but stayed patient and waited for this opportunity to play Division I football.

“I feel like I’m good enough, and I can prove myself to be one of those Division I players,” Wortham said. “I just want to go earn it.”

“One thing we talk about a lot is betting on yourself,” Glisson said. “We encourage that in our program. We try to instill that confidence in those guys.”

One of the key factors for Wortham in choosing to be a walk-on at UCF over other Division I schools is the fact that former Troup wide receiver Kobe Hudson transferred from Auburn to UCF back in January. Hudson and Wortham are close friends with the elder Hudson helping to mentor Wortham back when they played football together at Troup.

“He’s my family, and literally plays the same position as I do, and I know there’s so much I can learn from him,” Wortham said.

“Kobe gives us the confidence that Buddy does belong there, and Buddy can play there,” Glisson said. “Kobe is not going to sugar coat it for him. Kobe will tell it like it is.”

Wortham had his family there to join him on such a big occasion, but none loomed over the proceedings quite like his father, also named Dwartney Wortham. His father is the wide receiver coach at Troup and had to play the role of father and coach.

“When I first started coaching him, I used to be a little tough on him to the point it wasn’t helping him,” the elder Wortham said. “I told [coach] G[lisson] you got it now, I’m going to step out of the way.”

Despite the fact that he was named to the Region 2-AAAA all-region first team after his senior season, Gilsson still feels like there is room for him to grow and mature his game.

“He still has untapped potential,” Glisson said. “He’s still growing and getting bigger. He’s at 6-foot-2, and he’s going to gain weight when he hits that weight room.”

One of Wortham’s favorite memories at the high school level stems from the fact that he swept crosstown rival LaGrange during his four years at Troup.

“One of my favorite moments at Troup was not one of my catches or anything, it was putting both of those LaGrange players on their butts,” Wortham said to belly laughs and thunderous applause from those in attendance.

Wortham’s football career has long since been over at Troup, but his high school athletic career still has some life in it. As he heads into the final weeks before he heads to Orlando, Wortham will be making some memories with his baseball teammates and all his classmates that have helped him reach for his dreams and achieve them.