Knight in shining armor: Davis Knight leads the Grangers in goals and assists as they head to the second round of the playoffs 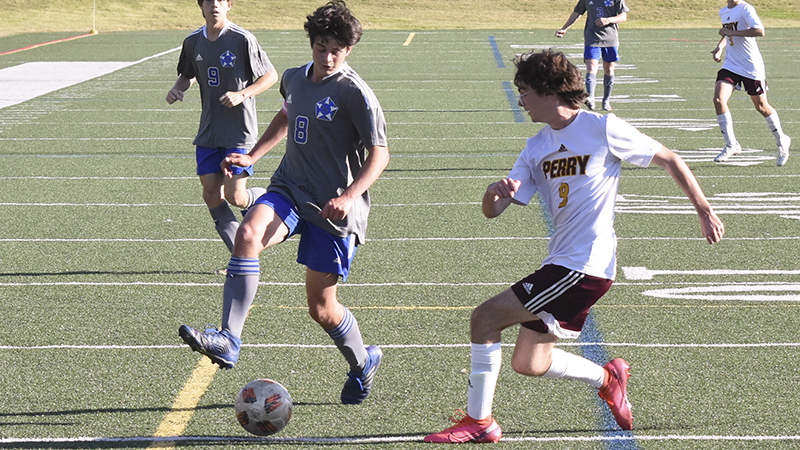 Davis Knight has been on a tear this season. If you attend a LaGrange boys soccer game, odds are you will see him score or grab an assist. Knight leads the team in both categories with 26 goals and 22 assists in only 18 games played including a two goal, one assist performance in the first round of the playoffs against Perry.

This is the best season of his career so far and has at least one more game to go as the Grangers head to North Oconee for the second round of the playoffs on Thursday.

“I’d love to score a couple in these next few games,” Knight said. “The next game is the most important game of the season from here on out.”

Knight’s game has grown tremendously this season, and it has not been limited to just one facet.

“Passing, moving, vision on the field has all gotten better,” Knight said. “Seeing who’s open and shots as well, really everything.”

Knight knows he still needs to get stronger and as just a junior he still has time to do that. He has eyes on playing college ball in the future and knows that he will have to continue to grow his skills on the pitch to get there.

Knight started playing soccer around five years old. He started at defense at first, but has progressively moved further up the pitch to where he plays now as a forward and attacking midfielder.

Knight is proud to be a Granger and wears it as a badge of honor on and off the pitch.

“[Being a Granger] means being a good representative of your school,” Knight said.

Knight feels like if the Grangers approach games with the right attitude they can make a deep run in the playoffs and potentially win the whole thing.

“It’s about being in the right mindset before games because if we’re screwing around we’ll end up messing up throughout the game,” Knight said.

When Knight is not suited up in Granger blue, he plays travel ball. His most recent team was the North Georgia Soccer Academy (NGSA) and hopes to play on the MLS NEXT club team in the future, which is one of the most prestigious soccer clubs in the United States.

One person who has helped him on this soccer journey more than any other is his father.

“My dad coached me as when I was young,” Knight said. “He was my travel team coach and has gotten me where I need to be today.”

Knight also looks up to Christiano Ronaldo, who plays the game fast, physical and is impeccable in front of goal.  He cannot help but admire his prowess.

Knight is more than just a soccer player, but soccer still is his utmost priority even in his free time. He is a member of the Service Club and used to be a member of the Foreign Language Club.

Knight continues to grow as a player and a person and has taken on more of a leadership role on the team this year. The Grangers will need Knight firing on all cylinders heading deeper into their playoff run, and he has delivered the goods so far.