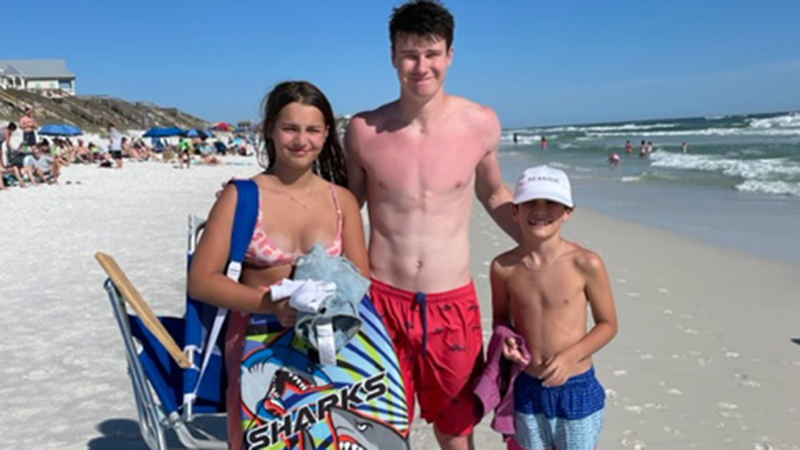 It was April 1 at Santa Rosa Beach, Florida. Two young kids (an 8-year-old, Robin, and a 12-year-old, Sadie) were caught in a riptide. Their mother stood helplessly on the beach frantically yelling for help.

“The waves were pretty strong with the rip currents,” said beach ambassador Judy Chung. “It was still really dangerous. The waves were white capped.”

“I guess you could say I feel really proud of myself for choosing to go out there and help the kids,” Doerr said. “I don’t feel like a hero though.”

“It was really wavy that day,” Chung said. “There was no way my husband or myself could have gone in there.”

While he does not want to be called a hero, his actions were definitely heroic. Doerr did not hesitate to jump in the water and help.

“I wasn’t really thinking about what was going to happen after, it was all instinct,” Doerr said. “I sort of just dove in the water when the mother was asking for help.”

Doerr’s friends dove into help, but he was the one who took the initiative. He did not think about himself or the aftermath, his sole focus was the lives of the children.

“I was just not thinking,’’ Doerr said. “I had one kid on one arm and one on the other, and I just paddled to the shore not really thinking.”

“I want to commend Jack and acknowledge his bravery.  He is a fine young man, along with his friends who were with him during their spring break trip,” Chung said. “All of them were respectful, engaging and a breath of fresh air.”

Doerr was on his spring break enjoying some wakeboarding with his friends when disaster struck, and it took some time to recover from what took place.

“I thought saving them was cool but just continued to have my spring break for the most part,” Doerr said. “It did throw me off a little bit.”

Doerr is very unassuming and was wary of the attention and praise this brought him.

He has received thanks and congratulations, both on the day of the incident and the days since, but Doerr’s primary focus was always on the well-being of the kids.

“[The praise] was nice to hear, but I was just happy the kids were safe,” Doerr said.

“Last year, we had four men drown, and I know two of them went in saving other children,” Chung said. “It could have been another horror story.”

Doerr’s time as a swimmer at LaGrange High School certainly helped in his ability to recover the children safely.

“Jack jumped into the rough water and grabbed them safely to shore,” Chung said. “The children were OK and relieved to be back on dry land, and their mother was thankful for Jack’s heroic effort.”