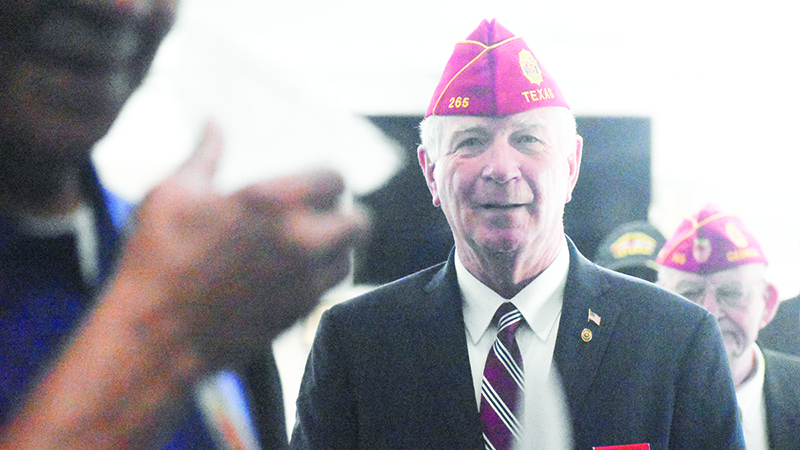 American Legion National Commander Paul Dillard visited LaGrange Tuesday to speak with area veterans about how, as veterans, they can fight back against veteran suicide and implore United States senators to pass important legislation that directly benefits and supports active and retired veterans.

Troup County alone has as many as 5,000 veterans, said Post 75 historian Tania Griffin.

Dillard has been visiting legions throughout the country over the past several weeks to discuss physical and mental health issues veterans are currently facing, especially in the aftermath of the COVID-19 pandemic.

“It’s something every family of a veteran in America deals with today,” Dillard said to dozens of current and retired veterans and public safety personnel at Post 75 on Jenkins Street. “If you pick up any paper today, you will see the number 18, 20 or 22 veteran suicides a day. Regardless of that number, we do know that one is too many.”

Dillard’s theme as national commander is “No Veteran Left Behind” and has advocated throughout his career for veteran services, including a veteran “buddy check” introduced in 2018 where veterans call one another to check in on their well-being.

“These last couple years have been [especially] hard for our veterans who … just don’t want to take the isolation, the quarantine, the loneliness and depression any more,” he said. “They wonder [what they will do] … especially if they had a job they don’t have anymore, and they have a family to take care of, and they think they might be better off without them. That’s when that phone call may be the phone call that saves a life.”

Dillard specified that reaching out to non-serving peers to assist with initiatives like the buddy check can save as many as 3,600 veterans’ lives a year.

Visit https://www.legion.org/membership/buddycheck for an instruction guide. To speak with someone with buddy check, call 1-800-273-8255, ext. 1.

“The worst thing that can happen is that [a veteran] will talk to you for over an hour,” Dillard said. “We had one talk for an hour and nine minutes the other day because he was so thankful to hear that other veteran’s voice on the phone. It made his day. Loneliness does happen.”

Dillard is additionally pushing for a handful of legislative actions, including the Promise to Address Comprehensive Toxics [PACT] Act, which aims to help veterans who are dealing with the repercussions of toxic-exposure from previous wars. The bill will provide veterans health care to deal with toxic-exposure-related illnesses and additional benefits.

The bill passed the house earlier this year and is currently being debated by the Senate, Dillard said.

“We need this bill passed now,” Dillard said. “We don’t need to wait 40-odd-years like Agent Orange was.”

Dillard additionally spoke on providing more services specifically for female veterans and the WWII Veterans Hospital and Medical Eligibility Act, which ensures all World War II veterans are eligible for health care services provided by the VA. Dillard said the American Legion first pushed for the act in 1996 for Spanish American War and WWI veterans.  Dillard said he spoke before Congress in March and found out the act had passed the Veterans Affairs Committee earlier that month.

Dillard also encouraged local Legionnaires to reach out to the younger generation of veterans and get them involved in the Legion programming.

“Those are the folks who are going to lead this organization through the next century,” Dillard said. “We’ve got 1,430,000 active veterans right now, and we discharge about 180,200 a year. We need to get them in to show them American Legion while we’re still around.”

Dillard was elected national commander of The American Legion in September 2021 during the organization’s 102nd national convention in Phoenix, Arizona.

He first joined The American Legion in 1969, according to his biography on legion.org. and is a is a lifetime member of the Lake Kiowa Post 265, in Lake Kiowa, Texas.