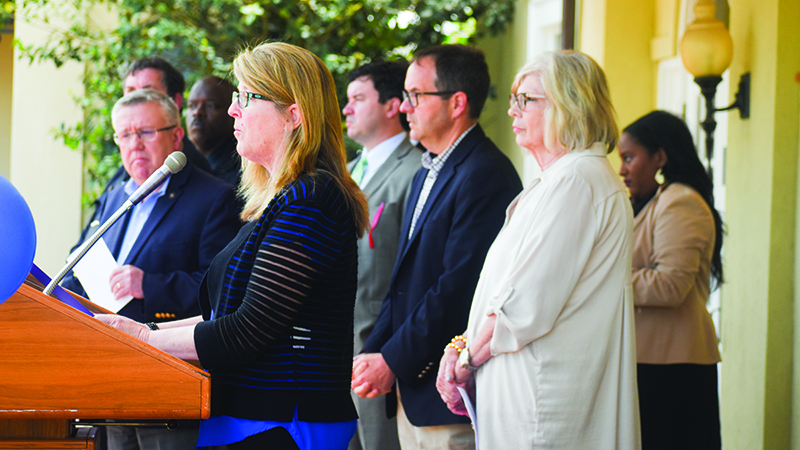 On Wednesday, these heads along with other county and city officials, joined together to comment on the importance of continuing its efforts to bring justice to those children who are experiencing abuse on all levels.

This document clarifies the role of law enforcement, the district attorney’s office and other groups in helping local children in abuse-related cases.

Herb Cranford, the district attorney of the Coweta Judicial Circuit and one of the featured speakers at the re-signing, explained that the document is meant to prevent further re-traumatization with victims.

“As you can imagine, it is a difficult thing for a child to have to tell somebody else about being abused, no matter what type of abuse it is,” he said.

Cranford explained when a child abuse allegation arises, law enforcement takes the child to the child advocacy center where a forensic interview is performed, allowing evidence to be gathered.. This evidence is used by Cranford’s office to present a case.

Cranford previously spoke with the Troup County Board of Commissioners at its work session Tuesday to discuss a problem his district is sharing with local courts – a backlog in cases. Cranford said his office’s caseload is 100% bigger than it was in January 2020.

Ultimately, he said, the Coweta County circuit did not have a functioning court system for two years when the coronavirus pandemic began. He further spoke of the challenges of keeping the staff he currently has in his office with non-changing salaries.

On Wednesday, he said his office is putting certain cases such as child abuse, to the forefront of their priority.

“We’re prioritizing cases [such as ones] where people have been put in jail, violent cases and also child abuse cases,” he said. “We’ve already had two child molestation cases this year, and we have one more lined up in the next few months.”

Troup County Sheriff James Woodward thanked his own investigators, as well as officers with West Point and Hogansville, for their work in child abuse cases.

“Can you imagine them having to get up and go to work everyday and see some of the worst of the worst that these children have to live in?” he said. “For them to want to and agree to do that, I salute them. It is our job as law enforcement to protect our children, the innocent, the ones that don’t have a voice.”

Both the Twin Cedars Youth & Family Services and Children’s Advocacy Center or Troup County deal with as many as 200 child abuse-related cases a year, the organizations’ heads said.

Kim Adams, director of the Children’s Advocacy Center of Troup County, said her organization assists with as many as 100 medical forensic interviews a year.

“I can’t really put a number of referrals for trauma-informed therapy we make, but every child that walks through our door is offered therapy,” Adams said.

Safe Families for Children and Troup Family Connection Authority will be partnering with the Children’s Advocacy Center of Troup County and Troup County DFCS to host a community event to raise awareness for Child Abuse Prevention Month with a one-mile awareness walk on Saturday. The one-mile awareness walk will take place at Southbend Park at 10 a.m. Register online at https://interland3.donorperfect.net/weblink/weblink.aspx?name=E334503&id=134