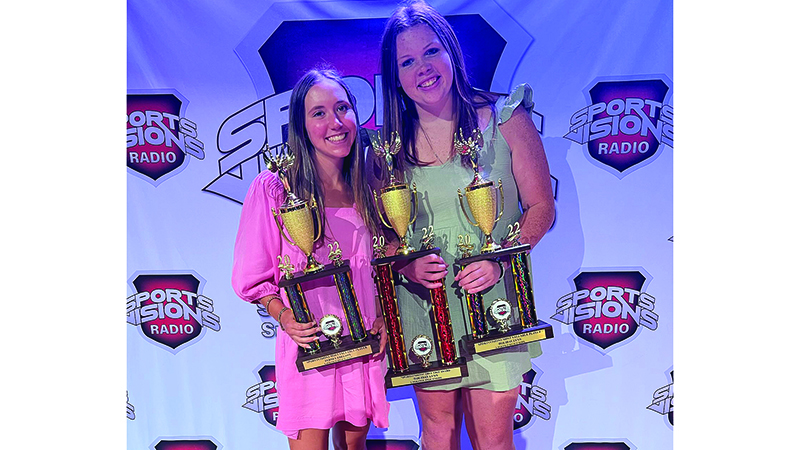 LaGrange High School softball star Holly Lynn and tennis star Sydney Edelson were honored as Sportvisions female athletes of the year on Thursday. The awards were for East Georgia and West Alabama as many of the best athletes in the area congregated for these awards. The ladies traveled down to Columbus not knowing what to expect at the luncheon and came back with some hardware in tow.

Lynn earned the MVP award and the True Grit award for her performances on the softball diamond.

“[The True Grit Award] basically was saying that I’m a hard worker and dedicated,” Lynn said.

To see, her hard work pay off was a sweet surprise for Lynn.

“It was really exciting for me, but honestly, it was more exciting being honored with one of my best friends,” Lynn said. “It was awesome that we got to be there together because she means the world to me.”

This is a sentiment that Edelson shared as well.

“Me and Holly are like best friends,” Edelson said. “Going with somebody else would not have been enjoyable. It was fun that we got to be there together.”

Neither were fully aware of what the luncheon would entail. They were both happy and elated when they found out what they would be receiving.

“They started reading off my stats and then they said that the person was committed to Columbus State University to play softball and I was like ‘oh, cool I wonder who else is going there too. Then, I was like oh it’s me,” Lynn said.

“When me and Holly first got there, we were confused about what was going on, and then they started mentioning all her stuff and said she won something, and we were both so shocked,” Edelson said.

The shock wore off as appreciation began to set it. Edelson and Lynn were the only two Grangers at the ceremony as they represented LaGrange with pride.

“It’s definitely one of my favorite achievements,” Lynn said. “Any achievement is worth celebrating. This one was pretty cool because it was unexpected. Most of the achievements I’ve earned I’ve just been waiting on them or working toward them.”

“It’s a pretty big achievement considering my sports are my life,” Edelson. “To be recognized for that while other good athletes were being celebrated meant a lot.”

Edelson and Lynn represent the best that LaGrange has to offer. Edelson will be attending the University of Georgia in the fall where she plans to play on the club tennis team. She had an offer from West Georgia to play tennis there, but an injury during flag football season made her reevaluate her priorities. The injury made her recalculate how she felt about playing collegiate sports, and she decided to focus on her academics. Lynn will be continuing her athletic career at Columbus State University where she will play softball. She was excited to be recognized in the city where she will continue to play softball.