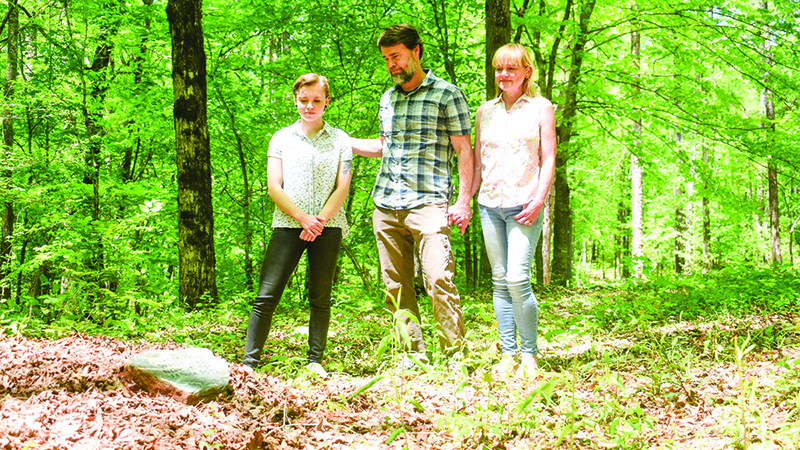 Amy Perry, right, stands with her husband, Jack Perry, middle, and daughter, Shiloh Perry, over her recently-deceased father’s grave. Harold Lloyd “Whit” Whitman was buried on the Whispering Hills cemetery grounds in January. This was one of the Perrys first times visit the grave since his burial.

Many patrons of Whispering Hills Natural Green Cemetery had one very important aspect in common – their loved ones loved nature and wanted to become a part of it upon their deaths.

On Friday at the preserve’s one-year anniversary, several family members of loved ones buried at Whispering Hills — a 140-acre nature preserve off Mooty Bridge Road — spoke on their experiences.

Amy Perry spoke on her father, Harold Loyd “Whit” Whitman’s love of nature and how he instilled the same in her when she was a child. She spoke on behalf of her mother, Anita Whitman, who had been married to her husband for 54 years. The Whitman’s lived in Cataula and had purchased traditional cemetery plots years ago, but ultimately decided to donate them and be buried at Whispering Hills as they became more environmentally conscious, Amy said.

Whitman received that pine coffin at his funeral in January. On Friday, Amy and her husband, Jack Perry, father-in-law, Whit Perry and daughter, Shiloh Perry, visited the area he was buried at — a small grove mere feet from a quiet stream. Now in April, the grave is still swollen from being disturbed, but small wood flowers are already starting to bloom around it and the area is shaded by Whitman’s favorite beech trees. This sign of life was a comfort to Amy. Whitman’s headstone is carved from a stone on the property, a requirement for patrons.

Now, Amy, Jack, and Whit have burial plots awaiting them.

“We’re investing in something that will help preserve a beautiful slice of nature,” Jack said.

Whispering Hills owner Ralph Howard and his sister, Jean, grew up exploring the rocky streams, forests and meadows dotting the homestead their parents purchased in 1946. Over 70 years later, the Howard family has continued to conserve the acreage for future generations, as they operate the natural green cemetery and memorial nature preserve at Whispering Hills. Howard works alongside neighboring funeral homes like Higgins Funeral Home who let clients know of the green burial alternative in their reach, he said.

He said Friday that the land is protected through the State of Georgia and is stamped as a perpetual care cemetery, protecting it from the traditional, environmentally insufficient standards of burial such as embalming. A portion of the funds patrons pay to be buried at Whispering Hills are put into a trust fund administered by the state.

Caitlin Freeman, a LaGrange resident, spoke on the recent passing of her youngest brother, Kyle Czarnonycz. He is currently the youngest person buried at Whispering Hills.

Freeman described her brother as a beautiful soul.

“He loved his family so hard, you could feel it in his hugs,” she said.

Following his death, the family had been unsure what to do with Kyle’s remains, Freeman said, but they wanted something special that would honor him. They found out about Whispering Hills and fell in love with an area near a nestle of rocks and moss.

Coincidentally, Kyle’s girlfriend, Anna McNamee, lives across the street from the property.

“She’s able to fill that connection and closeness and send us pictures of the sky,” Freeman said. “That’s something that makes us feel close to him.”

Sherry Taylor lost her husband of 57 years, Boyd Taylor, last April. One of his final requests just before his death, she said, was to see Whispering Hills. He had already planned to be buried there, Sherry said, but it wasn’t until his final visit to the cemetery that the decision was finalized.

“He pointed at the spot he’s buried at now and said that’s where he wanted to be,” she said. “And one day when I go to Heaven, I’m going to be right there too, and there’s going to be a rock there with my name on it.”