LaGrange Woman’s Club to host a fundraiser for library renovations 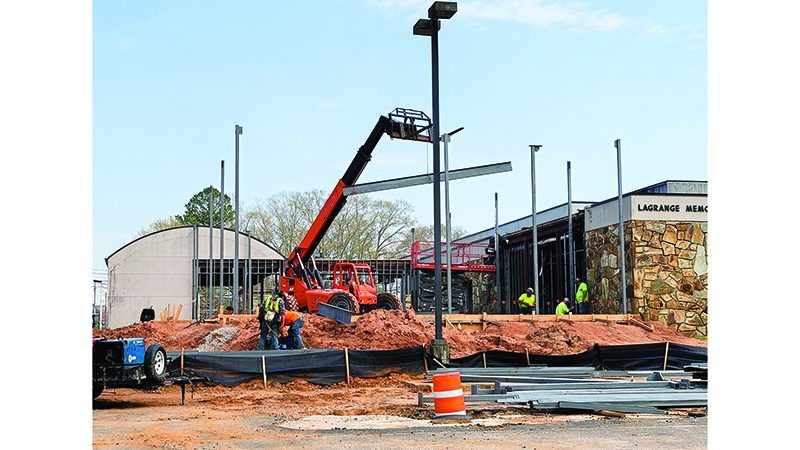 A lot of progress has been made on the LaGrange Memorial Library’s exterior. The LaGrange Women’s Club’s upcoming silent auction fundraiser will help fund the library’s interior.

The LaGrange Women’s Club is hosting a silent auction fundraiser to help support the new renovations to the LaGrange Memorial Library on April 30 from 7 p.m. to 10 p.m. The auction will feature over 60 pieces of artwork from local artists, including paintings, sculptures, quilts and much more.

Betty Johnson, a member of LaGrange’s Woman’s Club and primary planner of the auction, said that the auction is a continuation of the long-running partnership between the library and the Woman’s Club.

“In 1921, the LaGrange Woman’s Club started the library with a donation of 300 books. It was initially located in the house of one of our founding members,” Johnson said.

Over the years, the library continued to expand.

In 1926, it relocated to a small brick building on Church St, where it was known as the LaGrange Veteran’s Memorial Library, in honor of the soldiers who died in World War I. By 1975, with over 150,000 books in circulation, the library once again needed to expand, and moved to 500 Broome St, where it’s still housed today.

Since its opening in 1975, the current library had gone through renovations only once in the 1990.

That is until 2020, when the library began a massive renovation project to expand and modernize its facilities. The renovations include an overhaul to the exterior of the building,  brand new study spaces, as well as an updated computer lab.

Unfortunately, COVID-19 impacts on lumber and building materials delayed the project’s end date to later summer 2022. Furthermore, with the price inflation caused by the pandemic, the budget for the project became much tighter.

“COVID raised the price of building materials, so while the library had enough funds to finish the exterior renovations, funds still need to be raised to finish the inside. That’s why we are hosting the auction,” Johnson said.

Johnson hopes that this fundraiser will help the library wrap up its renovations, while also celebrating the rich history of the library as a whole.

“This auction has been really fun to plan and work on, and it’s going to such a good cause. A library makes a town special, and brings a sense of cohesiveness to the community,” Johnson said.