Annual Valley River Rally to return in May

The sixth annual Valley River Rally will take place on Saturday, May 7. The three-mile paddle will kick off at 3 p.m. from Hardley Creek Park and end at the Downtown River Park in West Point, where there will be a party featuring local food, beer and live music.

“We’re fundraising for the West Point Lake Floating Classroom scholarship program and our water monitoring efforts and trash clean up,” Jacobs said. “We would like to raise at least $5,000 from a combination of paddle registration, as well as proceeds from sponsorships.”

The party after the paddle will be open and free for the public to attend whether or not they paddled. It will last from 5 p.m. to 8 p.m.

There will be two food vendors at the downtown party — Johnny’s Pizza, which is a sponsor, and Daniel Holloway, who will be cooking ribs, burgers and hot dogs. Wild Leap Brew Co. is donating beer to the event, which will be sold as part of the fundraiser. Jacobs said those 21 and over who register can each get a free beer.

Live music will be provided by blues musicians Mudcat, who is from Atlanta, and Jock Webb, who is from Florence, Alabama.

Potential participants are encouraged to register for the event online, as there only 100 people can paddle.

Jacobs said the reasoning behind this limit is to keep the experience safe and enjoyable. People will be able to register at the event if any slots are left. To register online, go to https://chattahoochee.org/vrr.

Jacobs said the event has sold out the past couple of years.

The shuttle ride will take place before the paddle.

“That way, when people get done, their car is already at the Downtown River Park, so they can just load up their gear and either hang out or head home,” he said.

He clarified that participants can drop off their boats at Hardley Creek Park before driving to the Downtown River Park and boarding the shuttle. 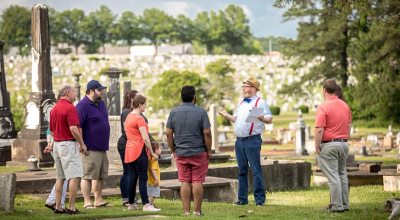