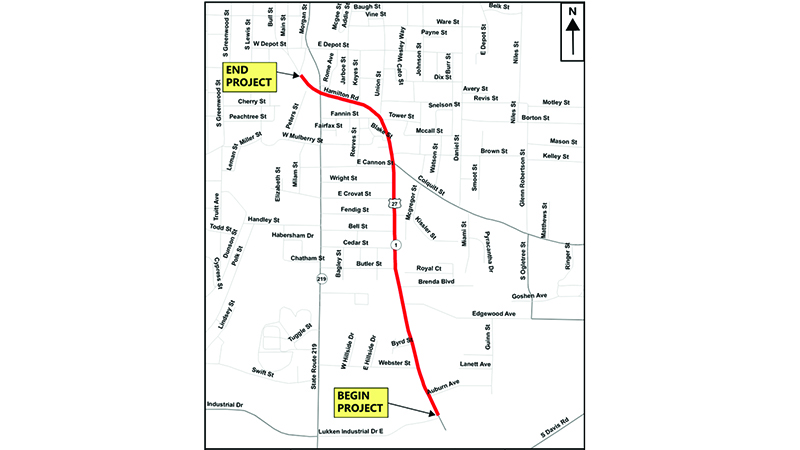 The Georgia Department of Transportation (GDOT) is seeking feedback about a proposed off-site detour utilized during the construction period of the Hamilton Road widening project.

According to the project’s description, the widening is meant to improve safety along the corridor with a dedicated center turn lane and raised median, reducing the number of left-turn crashes. Improvements will allow enough vehicular storage for future traffic, which would reduce queues and allow for better movement of traffic and improve pedestrian facilities along the corridor.

The public comment period will close May 13. To comment, contact Darrius Lee, GDOT District 3 project manager, at (404) 865-3474 or dlee@dot.ga.gov. Visit https://us-27-widening-detours-322250-gdot.hub.arcgis.com/ for additional information on the project and a list of frequently asked questions.

It would also provide connectivity between the heavily traveled SR 1/US Route 27/Hamilton Road corridor from I-85 south of LaGrange to near County Road (CR) 256/Waughs Road north of LaGrange.

To encase these improvements, this project would widen a two-lane roadway to four lanes with a 20-foot raised median urban shoulders.

The proposed project would widen the existing two-lane roadway to provide four 11-foot lanes, two in each direction, with a 14-foot center turn lane (flush median) from Auburn Street to the intersection with Fannin Street.

The existing right-of-way is approximately 50-60 feet, and the existing road configuration consists of two 12-foot lanes.

GDOT said phasing the project is not proposed at this time.

A series of staged temporary detours would be required during construction for durations ranging from 60 to 180 days.

The detour lengths would range from 0.3 miles to 0.7 miles.

The detours would be staged in a way that would allow some access through the corridor during the entirety of the construction.

Following the end of the public comment period, public feedback will be assessed, revisions may occur to the proposed plan initially brought to the public or the no-build alternative will be selected. Once a Concept Report is approved, the project alignment will be refined.  If major changes occur to what was previously shown to the community, additional public outreach will occur. If no major changes are proposed, the project would advance to right-of-way acquisition and into the final design.