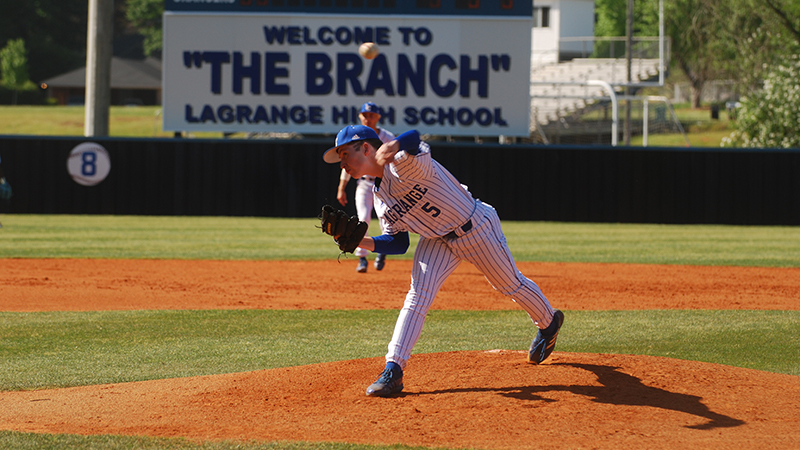 The LaGrange High School baseball team swept aside Spalding with relative ease in the first round of the playoffs on Wednesday. The team dominated both games of the doubleheader as Spalding could muster very little in an attempt to force the Grangers into a game three on Thursday.

The first game saw the Grangers go down 2-0 in the third inning but LaGrange used a monster late game rally to secure a win.

The Grangers tied the game in the bottom of the fifth when Trey Cook hit a two-RBI single.

The Grangers followed the fifth inning with a furious sixth where they plated eight runs and took a commanding 10-2 lead. All eight runs came with two outs as Granger batters kept coming up clutch. The dominant sixth started with Robbie Parker hitting a RBI single to give the Grangers their first lead of the game. Preston Pressley was walked before Cook and Seth Stargell were hit by pitches, all with the bases loaded to drive in three runs and give LaGrange a 6-2 lead. Zack Thompson hit a two RBI single followed by Seth Stargell scoring on an error. Colton Esposito hit an RBI single to drive in the Grangers final run of the inning and cap off an inspired late-inning rally.

Robbie Parker entered the game on the mound in the seventh in place of Cook and had three up, three down to cement the win for LaGrange. Cook got the start on the mound and had a good showing in his six innings of work as he struck out four and allowed two earned runs on only three hits.

Cook put in work from the plate as well as he went 1-for-3 with a team leading three RBIs. Gryson Cockrell and Parker both went 2-for-3 from the plate with two runs scored with Parker adding an RBI to his tally as well. Thompson had the other multi-hit game for the Grangers as he went 2-for-4 with two RBIs.

The second game featured much less drama for the hometown crowd as the Grangers annihilated Spalding 13-1.

LaGrange took a lead in the second inning when Cooper Stephens hit a RBI double to drive Esposito home. Cockrell hit a RBI single later in the inning to score Stephens and give the Grangers an early 2-0 lead.

The top of the third inning saw the Grangers score two more runs with Thompson grounding out to drive in a run before a balk scored Stargell.

The Grangers kept the offense going with another three runs in the top of the fourth. Pressley laid down a bunt that ended in a fielder’s choice to drive in a run. Cook then stepped up to the plate and did some damage with a monster home run to drive in two runs to give LaGrange a 7-0 lead.

Spalding tacked on a run in the bottom of the fourth, which served as a consolation run at best.

Pressley stepped on to the mound to replace Trevor Booton in the seventh and got three quick outs to send the Grangers into the second round of the playoffs. Booton was electric as he struck out 12 batters in just six innings. The only slight blemish was that he let in one earned run on six hits, but it was a dominant performance on the mound for the junior.

Stargell had an great night from the plate as he went 4-for-5 with two runs and three RBIs. Cockrell also had a big game offensively as he went 3-for-4 with a RBI. Cook, Thompson and Tanner Langley all had two RBIs in the game.

The Grangers will now host the winner of the Arabia Mountain versus Flowery Branch series next Tuesday in a best of three series in the second round of the state playoffs.