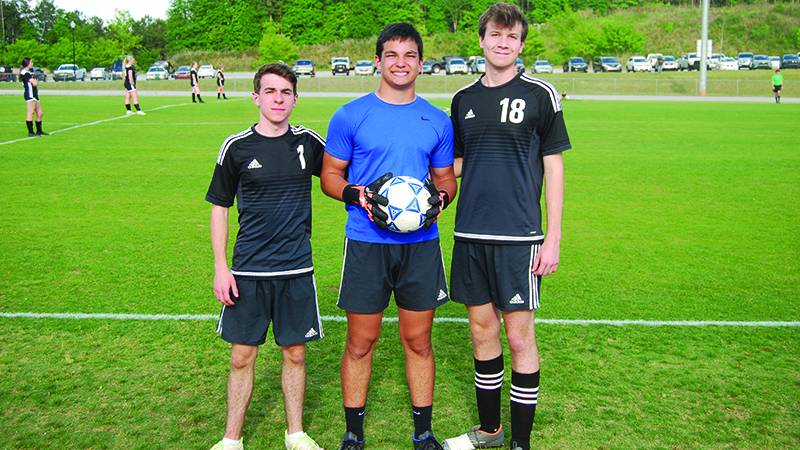 The LaFayette Christian School soccer team celebrated three senior boys on Monday before their last regular season home game. Beau-Hunter Lee, Jack Rensenhouse and Bobby Taylor were the three seniors being celebrated on the evening. The sun dipped below the horizon and a purple and red swirling skyline provided a scintillating backdrop to a wonderful celebration.

Rensenhouse and Taylor are stalwarts on the Cougars as they have played all four years there, but for Lee it is his first year playing soccer and his first year at LaFayette Christian.

“I’m so glad that I decided to play soccer this year as a senior,” Lee said. “I’ve been having fun, and I’ve made friends and family.”

Lee is the team’s starting goalkeeper despite this being his first year playing soccer. He has been good enough to earn the plaudits of his comrades.
“He might be the best goalie in the region honestly,” Lee said.

Despite only being at the school for a year, Taylor has some soccer memories that will last a lifetime.

“We went on a revenge tour. We had two teams that crushed us and then they came here and we beat them,” Taylor said.

Lee has been a rock in the back for the Cougars as he is one of the starting center backs for the team. Over the years, Lee has taken on more responsibilities as he has become a leader for the team.

“I’ve been instilling in the younger guys the same thing the older guys instilled in me when I got here,” Lee said.

Lee and Rensenhouse share the same soccer memory: When Rensenhouse stepped up to the spot as the seventh penalty kick taker in a shootout in the region championship and he buried the ball in the back of the net and was carried off the pitch as the match winner.

“You can’t steal that, that’s my favorite memory!” Rensenhouse said. “Having a group of guys stand behind me despite me not being the best player made me who I am today.”

Rensenhouse was extremely nervous as he stepped up to take the penalty but buried it.

“I learned that it’s okay to make mistakes and that has made me become a better player,” Rensenhouse said.

All three players would not be the same people without the team. Taylor came to the school as a senior after moving from Alabama and soccer has helped him make this area home.

“I’m glad I came here, and I wouldn’t take back any of it,” Taylor said.

Lee has been playing soccer longer than his senior counterparts and despite playing soccer for so long he still finds playing with these guys to be a special experience.

“I’ve been playing soccer pretty much my whole life, and it’s great to be able to play with these guys,” Lee said. “It’s fun to play, but the best part is coming out here with these guys.”

Rensenhouse looks forward to the end of the school day where he can get out there and play a game he loves with his dear friends.

“It’s a huge blessing to me,” Rensenhouse said. “Whenever I have a bad day at school, I get to come out here and hang out with these amazing people.”

The only thing that soured the day was the fact that they lost 4-1. The season is not over for the Cougars though, as they play in the state tournament on Friday as they travel to Peachtree City.