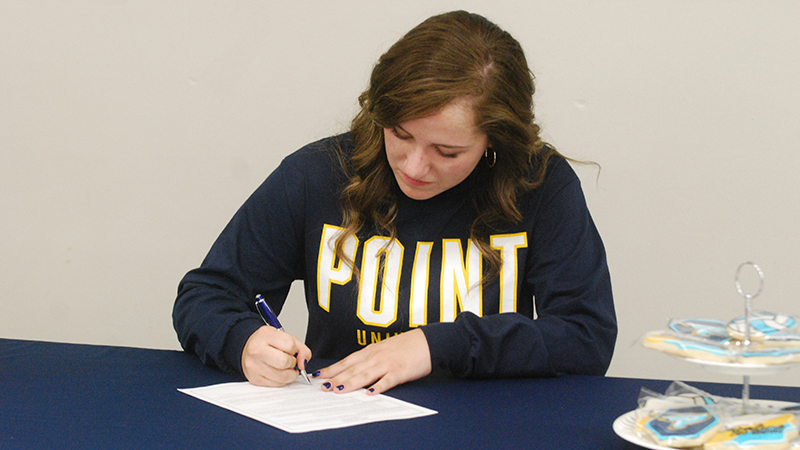 On Wednesday, LaFayette Christian School’s star volleyball player Caraline Jackson made her decision to sign on the dotted line and fully commit to playing at Point University.

Jackson has played volleyball for the Cougars since middle school and has grown during her years as a player to become one of the most prominent players in Cougar history.

“Caraline holds several records here at our school in regards to setting the ball,” said Jackson’s former middle school and JV coach, Rene Gomez, the head of schools at LCS. “She is also a great individual in regards to defense.”

Jackson is home schooled, but the program at LaFayette Christian School allowed her to play volleyball, which proved to be a symbiotic relationship.

Jackson spent most of her career on the court but has taken up beach volleyball in recent years as well.

Jackson had eyes on Point University for a while now and knew that if given the chance she would end up being a Skyhawk.

“I think I’ve been going to their games since I was 14 years old,” Jackson said. “I’ve just fallen in love with the school, and the people there are just so nice.”

Another selling point besides volleyball was the intersection of athletics and Christianity at Point, which has been a big part of her life at LaFayette Christian as well.

“It is one of the main reasons I chose Point,” Jackson said. “You can tell they care about the spiritual aspect of the students going there, and that is something that I just love about Point.”

Jackson is looking forward to attending college close to home as she cannot imagine life without her family. Sticking close to her home was an easy decision for Jackson.

“I met Caraline about a year and half-two years ago,” Gineris said. “Skill is one thing, but the best thing about Caraline is her personality and character.”

Now that the decision is official, Gineris and Jackson will be growing on the court together next season for Point. This has been a long time in the making, and Jackson is just happy that it is finally official.

“Knowing coach Faith is so nice,” Jackson said. “I’m just so excited to be working under her. Point has been an amazing school to be a part of so far.”