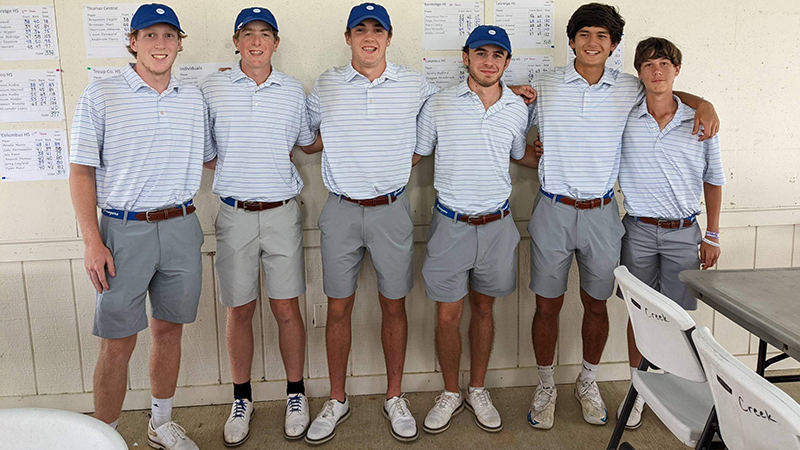 The LaGrange High School boys golf team is moving on to state after a third place finish in the region tournament Tuesday. This will be the team’s first trip to the state tournament in five years and the first under the stewardship of head coach Ben Thrasher. This is a big step for a program that has floundered a bit in recent years until Thrasher took the helm back in 2020.

“This is a great opportunity for us,” Thrasher said. “Realistically, we are going to be better next year, so for this group to have the opportunity to go to state this year is huge.”

With the program retaining four of the six golfers on the team for next season, this finish in the region will be something to build off of in the future. Gardy Westmoreland is only a freshman but has already made a huge impression with his raw abilities.

“Grady is a tremendous golf talent,” Thrasher said. “I can’t even accurately state how important his scores have been for us the past month.”

Westmoreland and senior stalwart Tripp Hollstrom split time between golf and baseball and soccer respectively during the spring season. This can be extremely tough on them as they cannot always find the consistency on the golf course that they desire.

“It’s a testament to Grady and Tripp that they play on their own when they can,” Thrasher said. “I think it’s harder on them than it is on me.”

Hollstrom has been a leader for the Grangers and helps the team in big tournaments despite splitting time with a physically demanding sport like soccer.

“I was really pleased with how Tripp played,” Thrasher said. “I don’t think he played as well as he would have liked, but he played really well for us.”

It was sophomore Ty Ormsby who led the way for the Grangers. He was the team’s low scorer in the region tournament and helped propel the Grangers into state. Just like the talented Westmoreland, Ormsby will have plenty of room to grow with the golf team over the next couple of years.

The team now has its sights on May 16 and 17 as they will travel to Houston Lake in Warner Robins for the state tournament. While they’d like to win, they will also be looking to make some gains on teams that they lost to recently.

“I want to go and try and beat two teams that we haven’t beaten this year,” Thrasher said. “If we can get a top 10 finish, that will say volumes about where we are right now.”

Reed Morris has a field day as the Tigers…