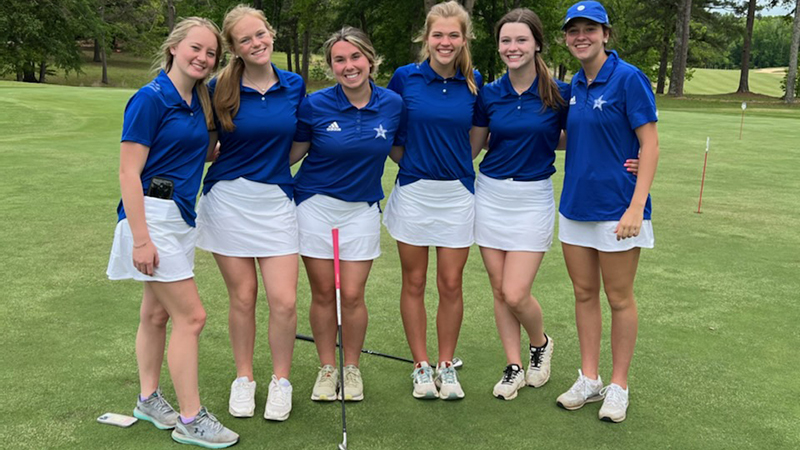 The LaGrange girls golf team finished fourth in the area as on Tuesday as Macee Stone shot the lowest score in the area tournament to book an individual spot in the state tournament. This was a huge accomplishment for the team as only one golfer — Stone — came into the season with any experience playing in tournaments like this. To compound the difficulties before the season started was a change at head coach. Mike Pauley had never coached golf before but was excited about the opportunity to do so.

“I was most pleased with our team because we had girls for the first time play 18 holes in one day,” Pauley said. “I have such inexperienced girls that they’ve not played that much golf.”

Stone is a senior and had plenty of experience playing golf and helped lead the team to state with her guidance along with Pauley’s.

Only one other player had tournament experience besides Stone.

Under Pauley’s stewardship, the girls golf team did something that many of the players did not think was possible before the season. Now, the goal is to get better and get at least one practice round before the state tournament on May 16 and 17.

Pauley knows this team is still growing but with so many young players on the team, a practice round at the state tournament is a chance to get them some valuable experience and help build the program.

“My hope is that the kids we take to state will learn some things,” Pauley said. “I believe this will help us take our play to another level.”

Besides Stone, the other girls on the team play other sports with golf serving as number two on their totem pole of sporting interests. For example, Carlee Roland and Sam Cottle are members of the soccer team and have to split time in the spring between their athletic endeavors with golf often taking a backseat. This is something that Pauley understands and is willing and able to work around.

“For most of my girls, golf is their second sport,” Pauley said. “For four of the players, softball and soccer are the main. I have to share a lot of time with other sports. It’s not a problem, but it will challenge how fast we can build the program.”

The five girls besides Stone — Alicia Quattrociocchi, Zoe Thompson, Hudson Wood, Cottle and Roland — have all made major improvements as the year has gone on. The next step for Pauley is showing them what the top golfers in the state play like when they travel to Warner Robins to take part in the state tournament next month. He plans on making this a learning experience for the girls.