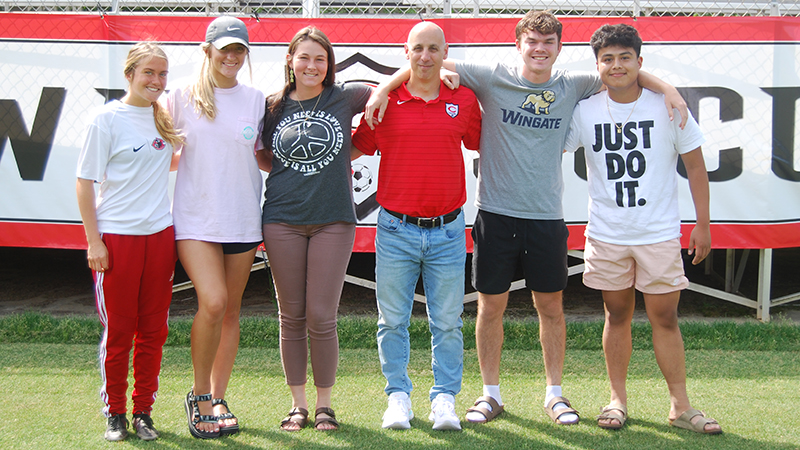 Callaway soccer had five players named to the DiVarsity all-state team– Kate McAteer, Raine Hunt, Keeley McGuffin from the girls team and Jostin Raymundo and Blake Eubanks from the boys team. Head coach Mike Petite was also named as the all-state head coach for his role with the girls soccer team.

These five players were, of course, also all-region selections and were joined by a whopping 11 teammates on the all-region teams — Nitler Recinos, Connor Davis, Nelson Herrera, Greyson Batchelor, Caleb Matias, and Brett Belton from the boys team and Mary-Kate Baswell, Kadence Leithleiter, Alora Vetsavong, Autumn Brown and Mya Lawton from the girls team.

It was the best year in program history as both teams set a record with win totals and all-region selections.

For McGuffin, this was her last season with Callaway, but she leaves a two-time Divaristy all-state player as she made the team as a junior as well.

“It feels really good just to know that I have that talent, and I worked that hard and it hasn’t gone unnoticed,” McGuffin said.

McGuffin was not as shocked as some of the other players as she had been there and done that, but it was a sweet feeling to get named again.

One player surprised was Hunt as this is her first year playing soccer. She did not know exactly what she was getting into, but put in spectacular performances in goal to be named to the all-state team.

“I kind of didn’t know what it was at first,” Hunt said. “It was very cool to see my name up there with this being my first year. Hopefully I will get it again next year.”

Despite being one of the top players on her team and one of the best players in the region, McAteer was still surprised to see her name included in the all-state team.

“It’s kind of crazy, I wasn’t really expecting it,” McAteer said. “It’s a huge opportunity, and I’m very excited about it.”

This is McAteer’s first year at Callaway, and she has been embraced by the school and the team with open arms. McAteer is excited about being able to be on the team with two of her teammates and her head coach.

“I’m very excited that I can enjoy this moment with my other teammates and coaches, and they make this so much better,” McAteer said.

One player received an exclusive honor — along with his all-region and all-state honors, Raymundo received the boys Region 5-AA player of the year. This was a monumental achievement as the Cavaliers play in a region with soccer powerhouse Bremen.

“It’s the cherry on the top for the season,” Raymundo said. “Getting recognized is a good feeling.”

Raymundo is a senior and has already played his final game for the Cavaliers, but he is excited to suit up with his teammate Eubanks in the upcoming all-star game.

“It’s great to be an all-state teammate with him because we just always link together over here so now we can show them what we can do in the all-state game,” Raymundo said.

“It’s going to be a fun game,” Eubanks said. “It’s definitely going to be cool having him there.

Eubanks was shocked and honored to see his name mentioned with these other talented players.

“I was pretty shocked being that I’m always being bullied for not being able to finish, but now I can say I’m an all-state player,” Eubanks said with a smile and a laugh. “It’s definitely a privilege to be recognized.”

Petite was named for his work with the girls team, but he also worked wonders with the boys team. This was Petite’s first year as the coach of the girls’ team.

“To get five kids selected to the all-state game is a huge success for a school like us, especially considering it was for all classifications,” Petite said. “It’s a great honor and great recognition for what they do and how hard they work.”

The ever-so-humble coach credits his players and his assistant coaches for all they have helped him accomplish and getting him named to coach one of the girls’ teams at the all-state game.

“Jeff (McGuffin) is my assistant and has helped bridge that gap between head coaches. He will be out there coaching with me at that ball game for sure,” Petite said. “It’s clearly a team effort.”